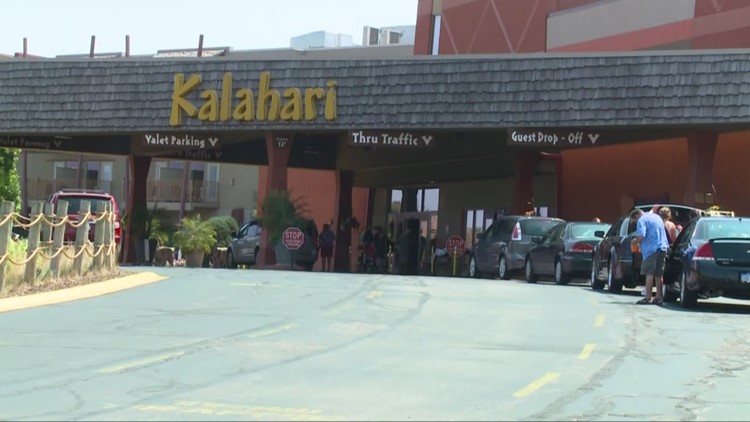 The pair of Michigan natives were each injured in the scuffle, and deputies say both were also drunk.

SANDUSKY, Ohio — Two people have been arrested and one is charged with multiple felonies following a large fight at the Kalahari resort water park in Sandusky on Monday evening.

Witnesses told Erie County Sheriff’s deputies the incident began when someone cut in line for the park’s surf ride, and video viewed by authorities and by 3News revealed that a major scuffle broke out. One woman, identified as 23-year-old Brittany Cabay of Flint, Michigan, could be seen throwing several punches at an unidentified man before he picked her up and threw her to the ground, causing her to briefly lose consciousness and begin bleeding from her head.

Moments later, a Kalahari EMT showed up on scene but was confronted by 24-year-old Zackary Colzin of Sterling, Michigan, who allegedly starting punching him before the EMT tackled Colzin down “in self defense.” Colzin then also hit his head on the ground and was knocked out before the EMT began to render first aid.

Once deputies arrived, Colzin regained consciousness, but officials say he then began swearing and punching one of the officers. He was then placed under arrest after being tazed. Once in handcuffs, he continued to swear and yell racial slurs as he was carried outside, where he also threatened self-harm.

While Colzin waited outside for an ambulance, Cabay came out after allegedly refusing medical attention and allegedly making death threats against officers and paramedics inside the water park. As she approached Colzin, he became “combative,” and officers asked Cabay to back away. She refused to identify herself (apparently saying she “was in school to be a police officer”) and continued to try to talk to Colzin before she, too, was placed under arrest.

Both Colzin and Cabay were taken to Firelands Hospital for their injuries, and police also claim they were both drunk “based off the strong odor of intoxicants” coming from their breaths. Deputies were able to positively identify Colzin, while Cabay’s mother did so for her later on.

Following medical treatment, Colzin and Cabay were both transported to the Erie County Jail and arraigned Tuesday morning in Huron Municipal Court. Their criminal charges are as follows:

In addition, authorities also say Colzin has a warrant out for his arrest in Michigan on a charge of theft of a motor vehicle. A holder has been placed on him while his Ohio case is being sorted out.

While no other individuals directly involved in the altercation have been charged at this time, the sheriff’s office says its investigation is still active. Kalahari security staff is also working on getting more video footage of the incident.

How Many Active Devices Are There?
What Google & Samsung’s Wear OS Partnership Means For Users & Apple Watch
Comment