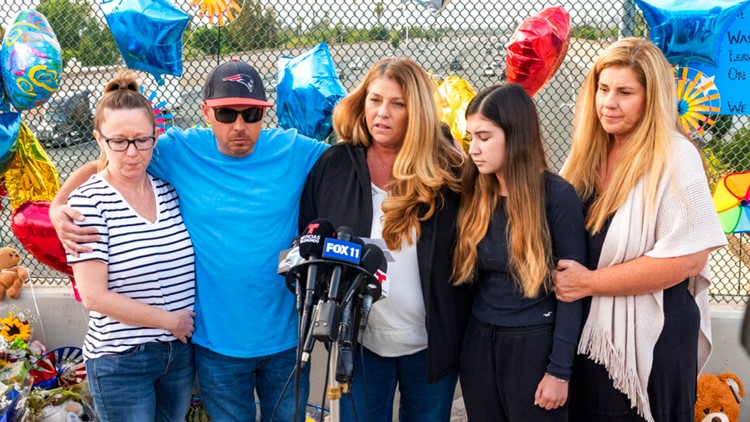 COSTA MESA, Calif. — One day after funeral services were held for 6- year-old Aiden Leos, who was shot to death in a road-rage confrontation on the Costa Mesa (55) Freeway, an Orange County couple has been arrested for the killing.

The suspects were identified as Eriz Marcus Anthony, 24, and Lee Wynne, 23, who were taken into custody by the California Highway Patrol at their Costa Mesa home on Sunday. Both are expected to be charged with murder.

The arrests follow a lengthy manhunt conducted by investigators from the Santa Ana Area CHP and the CHP’s Border Division Investigative Services Unit.

“On behalf of Border Division Chief Omar Watson, and the Santa Ana Area, we are deeply grateful for the professionalism and tireless commitment of our investigators who have worked on this case from day one to find those responsible for Aiden’s death,” said CHP Commissioner Amanda Ray. “While these arrests will not ease the pain of a mother’s loss, my hope is for the Leos family to have some peace of mind and to rest assured the CHP will work with the Orange County District Attorney to bring justice for Aiden.”

CHP Border Division Chief Watson also thanked the Southern California community for its “indescribable outpouring of concern and hundreds of tips” that helped investigators find the suspects. “The department has been in regular contact with the victim’s family and I assure you they, like us, are committed to seeing justice served,” Watson said.

Shortly before or after 8 a.m. on May 21, Aiden’s mother, Joanna Cloonan, was driving a silver Chevrolet Sonic northbound on the 55 between the Garden Grove (22) Freeway and Chapman Avenue in Orange when a road rage incident ensued with the occupants of a white Volkswagen station wagon — believed to be Anthony and Wynne — who perceived her to have made unsafe lane change, according to the CHP. Pistol shots were fired and at least one round fatally struck the boy in his right rear passenger child’s seat.

Officials said they believed a woman was driving with a male passenger.

Passersby Reyes Valdivia and his wife stopped to help when they spotted Cloonan on the freeway shoulder pulling her son from the passenger side of the car. He said she told them that when she tried to switch lanes to exit, a vehicle with a man and woman inside cut her off and she gestured to them and proceeded into the exit lane, which is when the bullet entered the left side of trunk and struck her son.

She called 911 and the boy was rushed to Children’s Hospital of Orange County, where he was pronounced dead.

At the funeral, Cloonan said, “Violence is an unacceptable way to settle our differences and because of this, my son lost his life.”

The CHP released the photo of the suspect vehicle — apparently a white 2018 or 2019 Volkswagen Golf SportWagen with non-tinted windows, but no visible license plate. It had last been seen eastbound on the Riverside (91) Freeway toward Riverside, said CHP Officer Florentino Olivera.

It was not immediately known who if anyone will claim the $500,000 in reward money that was put up for arrest and prosecution of the suspected killers.

Anyone with information on the suspects was asked to call the CHP at 714-567-6000. The CHP also asked for tips at santaanachptipline@chp.ca.gov. Anonymous tips were also sought, at 800-TELL-CHP, and a tipster website was created specifically for the case — www.aiden-reward.com.