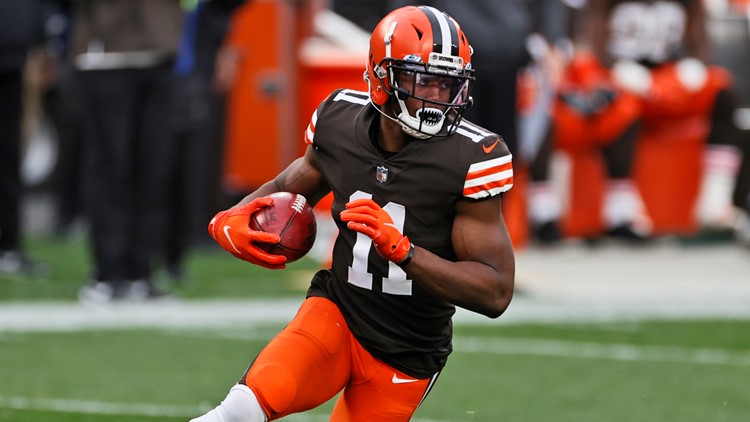 From high draft picks to former afterthoughts, there are more than a few emerging players who could help the team in a big way.

CLEVELAND — It’s pretty easy to know who the key players are on the Cleveland Browns.

Both sides of the ball are littered with star power, from a franchise quarterback to stud receivers to a Defensive Player of the Year candidate. It’s one of the deepest rosters the team has had in a long time, making them one of the NFL’s prime contenders.

‘SOMETHING SPECIAL ABOUT THIS TEAM’: Odell Beckham Jr. excited to return to Browns following rehab from injury

But as we all know, no team wins games with proven superstars alone. Every year, the best clubs also rely on players who emerge from either inexperience or past tribulations to make an essential impact, whether as starters or depth contributors.

Though they are sometimes overshadowed by the established names, the Browns have plenty of candidates ripe for breakout seasons in 2021. Let’s dive a little deeper into five of them.

Once one of the top college recruits in the country, the Detroit native struggled in three years of Jim Harbaugh’s Michigan offense, causing him to fall to the sixth round of the 2020 draft. The Browns took a flyer on him and he responded as a rookie by averaging more than 20 yards per reception with two touchdowns, including a dramatic game-winner in the final seconds in Week 7 against Cincinnati.

The team still sees a lot of potential in Peoples-Jones and his sophomore campaign seems like the perfect opportunity to leave a lasting impression. However, he still only caught 20 passes last year, and in an offense that already includes Jarvis Landry, Rashard Higgins, Austin Hooper, and a returning Odell Beckham Jr., it could take a lot of work to get more.

Should Peoples-Jones continue to improve, he will add only another wrinkle to a high-powered receiving corps. The 22-year-old could also give the Browns some flexibility should they decide to move on from either Beckham or Landry in the offseason.

The Notre Dame All-American was considered the steal of this year’s draft, falling all the way to the second round after initially being pegged as a first-round talent. The Virginia native earned the Butkus Award with 13.5 tackles for loss and 5.5 sacks and emerged as one of the best pass coverage linebackers in the country.

After missing the start of training camp due to COVID-19 issues, Owusu-Koramoah has arrived in Berea to compete for a starting job and many feel he could already be among the best in the Browns’ linebacker room. The unit was a major weak spot for Cleveland in 2020 and struggled mightily against potent tight ends like Mark Andrews and Travis Kelce.

Browns general manager Andrew Berry was salivating when he was able to snag Owusu-Koramoah at No. 52. If the 21-year-old comes as advertised, he could be a major game-changer for years to come.

On defense, the secondary (outside of Denzel Ward) was also fragile for the Browns last season. Two big reasons for that came in two season-ending injuries to key players: Greedy Williams (shoulder) and Delpit, who tore his Achilles before his rookie season could even get underway.

A 2020 second-round pick, Delpit was a two-time All-American at LSU and won the 2019 Jim Thorpe Award as the nation’s best defensive back. He recorded 199 tackles and eight interceptions in a three-year college career and was expected to step right in for Cleveland last year before getting hurt.

2020 starting safeties Karl Joseph and Andrew Sendejo are now gone, but Ronnie Harrison Jr. and Sheldrick Redwine remain while John Johnson III has been brought in as the new leader of the group. Delpit is currently listed as the backup to Harrison at strong safety, but has been sidelined for much of training camp by a hamstring ailment. The latest setback is obviously not a good sign, but if the 22-year-old can recover, he has more than enough potential to be a formidable weapon in the Browns’ pass coverage schemes.

When it comes to the defensive end position, there’s no doubt Myles Garrett and Jadeveon Clowney are the leaders of the group. But depth is essential, and with the Browns dealing with attrition last season, one man in particular stepped up when he needed to.

In 14 games in 2020 (three starts, all wins), Gustin tallied 30 tackles and often played more than half the defensive snaps. His role increased towards the end of the year with Garrett contracting COVID-19 and Olivier Vernon tearing his Achilles and once the playoffs rolled around, his key interception helped Cleveland earn an emotional wild card win over the hated Pittsburgh Steelers.

Vernon and Adrian Clayborn have since left the shores of Lake Erie, while Clowney and former first-round selection Takkarist McKinley have arrived. The battle for reps behind the two stars will be fierce, but Gustin — who went undrafted out of USC — has been no stranger to adversity. This is his chance to become a key contributor on the line for perhaps years to come.

Less clear is the picture at defensive tackle, with mainstays Larry Ogunjobi and Sheldon Richardson both leaving via free agency. The Browns will be searching for two new starters, and the rookie Togiai will get a chance to compete.

A native of Idaho, Togiai made a name for himself down I-71, helping Ohio State win three Big Ten titles and make the College Football Playoff twice. As a junior, he notched 23 tackles and added three sacks (all in a win over Penn State) to earn second-team All-Big Ten honors before missing the national championship game due to COVID protocols.

Cleveland drafted the 6-foot-2, 296-pound Togiai in the fourth round and the 21-year-old has already been lauded for his football acumen and toughness. While the defensive tackle room is a bit crowded, there are no truly established names, with newcomers Malik Jackson (a former Pro Bowler in Jacksonville) and Andrew Billings (opted out of 2020) currently listed as the starters. Togiai is third on the right side behind Billings and Sheldon Day, but he should get playing time right away and those reps could increase as the staff figures out the best rotations for the unit.