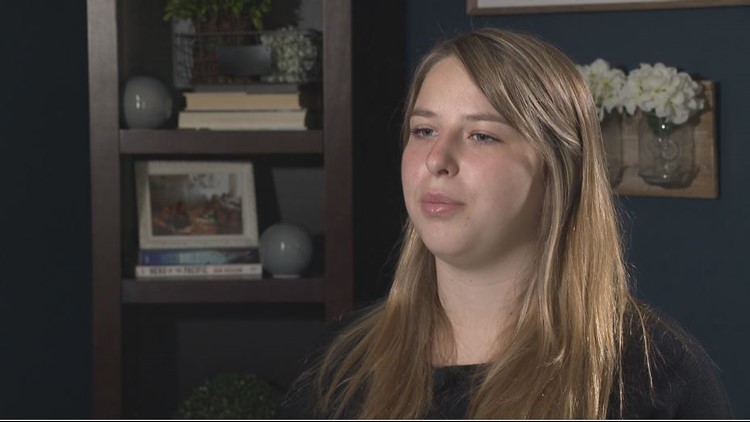 In an exclusive interview with 3News Investigates, we hear one young girl’s struggle to be heard and the toll it’s taken, all before she entered high school.

HURON, Ohio — Our schools are supposed to be a safe haven, a place of learning life’s lessons.

But for one Northeast Ohio family, the lesson came early, in graphic text messages, videos, and hallway whispers.

In an exclusive interview with 3News Investigative Reporter Rachel Polansky, we hear one young girl’s struggle to be heard and the toll it’s taken, all before she entered high school.

CONTENT WARNING: The following story may be difficult for some to read

It started in eighth grade at Huron Middle School.

“He pinned me up against the locker and put his hands down my pants,” Bella Jordan said.

That moment would be stored in Bella Jordan’s head from that moment on– a memory too dark to share, at least for now.

“It was weighing down on me, day to day,” Bella told 3News’ Rachel Polansky.

Bella said the same boy also sent her graphic images and videos of himself, and it started to take a toll.

As Bella’s grades began to slip, her mother sensed that something was wrong.

”She was our little social butterfly. People seemed to come to her, she was a fixer,” Bella’s mom, Michelle Jordan, said.

This time, Bella’s parents knew it was their daughter who needed fixing.

Shocked by the texts, and not yet aware of the locker room assault, the Jordans believed a meeting with the boy and his family would end things. They were wrong.

“She would come home and cry and tell us, he was screaming stuff at her or yelling things at her, and just wouldn’t leave her alone,” Michelle Jordan said.

The family also went to officials with the Huron Police Department; Huron, however, is a small suburban town, and the detective assigned the case was also the boy’s football coach.

Not only did the boy remain at the middle school, but he was seated next to Bella in several classes.

“It is awful and I don’t think people realize the toll that it takes on your body to not be heard,” Bella said.

“She was becoming combative, quiet, depressed. Then in a discussion, I said there’s gotta be something else going on here, you gotta talk to me, tell us and she told us about the sexual assault,” Michelle said.

The boy eventually pleaded in juvenile court and received probation, but he remained in school and on the football team.

To the Jordans, it seemed like he was being shielded by a school who didn’t care about their daughter’s struggles, which included a weeklong hospital stay for depression and post-traumatic stress disorder.

The Jordans put Bella into counseling and later enrolled her in a new school.

Today, Bella says she’s recovering and hopes that by sharing her story, she can help other teens who may be suffering in silence.

“Now I’m finally able to heal knowing this is going in some direction and knowing that the school can’t just do this to multiple people and be okay with it. I’m hoping throughout all of this, something does change,” Bella said.

Huron City School District declined to comment on this report.

That’s due in part to the Jordan’s filing a federal lawsuit against the district. That case is currently pending.

RELATED: 3News Investigates: Why an Ohio animal rights activist is working with puppy mills to save dogs

What day does the child tax credit come out?
Stevie Nicks cancels 2021 dates due to COVID
Comment