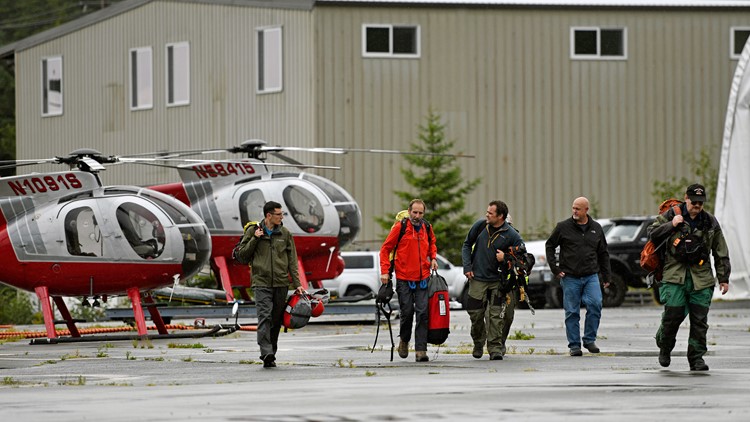 The six passengers killed include two people from California, two from Georgia and one from Illinois.

Federal investigators hoped Sunday to recover the wreckage of a sightseeing plane that crashed in southeast Alaska, killing six people, but the timing of the recovery depended on the weather, a National Transportation Safety Board official said.

The wreckage was in a rugged, steep area that is heavily forested, said Clint Johnson, chief of the agency’s Alaska region.

“Very challenging conditions,” Johnson said, adding that the wreckage would have to be removed by helicopter.

He said Sunday morning he had not yet received an update from the team as to their status in trying to recover the wreckage.

Interviews also were planned Sunday with the airplane operator and others in Ketchikan, he said.

The flight was returning to Ketchikan on Thursday from a tour of Misty Fjords National Monument when it crashed, Johnson said.

The plane carried five passengers and the pilot. The Alaska State Troopers identified the pilot as Rolf Lanzendorfer, 64, of Cle Elum, Washington. Troopers identified the passengers as Mark Henderson, 69, and Jacquelyn Komplin, 60, both of Napa, California; Andrea McArthur, 55, and Rachel McArthur, 20, both of Woodstock, Georgia; and Janet Kroll, 77, of Mount Prospect, Illinois.

Troopers and Ketchikan Volunteer Rescue Squad members reached the scene via a chartered helicopter Saturday afternoon and recovered the bodies, which were being taken to the state medical examiner’s office in Anchorage, the troopers said.

Holland America Line confirmed the five passengers on the flight had been traveling on the company’s ship Nieuw Amsterdam, which was nearing the end of seven-day Alaska cruise.

Ketchikan is a popular stop for cruise ships visiting Alaska, and sightseeing excursions, such as those to Misty Fjords National Monument, are among the options for exploring the area while off the ship.

The cruise line said the excursion the passengers were on was not sold by Holland America Line.

Southeast Aviation, the flight operator, in a statement Thursday said it was cooperating with the agencies involved. “All of us share in the anguish of this tragic incident, and our prayers go out to all affected,” the statement said.

The company, through a spokesperson Sunday, said it had no additional information to share.

The plane’s emergency beacon was activated about 11:20 a.m. Thursday, the U.S. Coast Guard has said.

A helicopter company reported seeing wreckage on a ridgeline in the search area, and Coast Guard crew members found the wreckage around 2:40 p.m. They reported no survivors, the Coast Guard said.