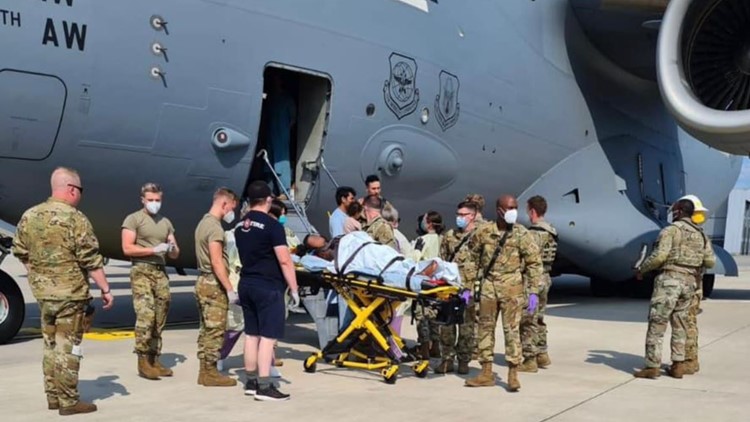 The woman experienced complications during labor aboard the flight, which left Afghanistan to an air base in the Middle East, before landing in Germany.

Just after a U.S. military C-17 evacuation flight landed at Ramstein Air Base in Germany on Saturday, a pregnant Afghan evacuee who was aboard the flight gave birth.

In a post to Twitter on Sunday the U.S. Air Mobility Command wrote that the woman went into labor while still on the transport aircraft as it was in its second leg of the journey fleeing Afghanistan.

The woman’s identity was not released, but U.S. Air Mobility Command said in a post to Facebook that she experienced complications because of low blood pressure while on the aircraft. The commander of the aircraft made the decision to descend while in flight in order to increase the air pressure inside the plane. This helped to stabilize and save the the mother’s life according to U.S. Air Mobility Command.

The mother and her new baby are said to be in good condition and were transported to a medical facility near Ramstein Air Base.

NBC news reported Sunday that, according to a spokesperson for Ramstein Air Base, at least 6,100 evacuees from Afghanistan had been flown to the air base since the start of the mission known as Operation Allies Refuge.

The Pentagon also said that 17,000 people have been evacuated from Afghanistan since Aug. 14, The Hill and others have reported.