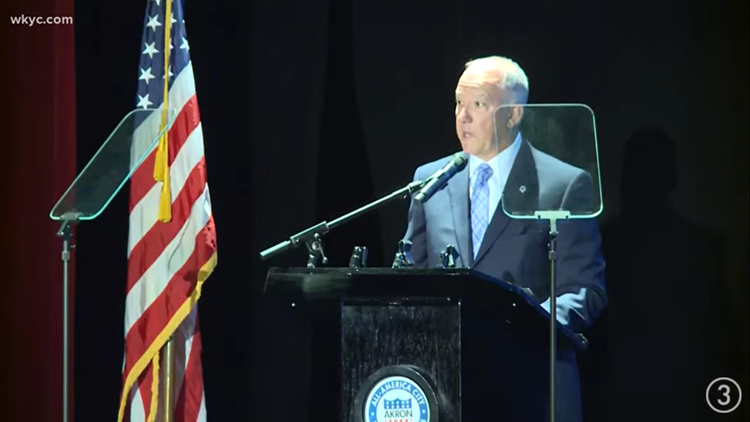 Horrigan discussed the challenges Akron faces as it embarks on a period of economic recovery and systemic change.

Horrigan had been scheduled to give the speech outdoors at Akron’s Lock 3, but the event was moved indoors due to the heat. His remarks came on the same day that Steve Mylett begins his role as the city’s new police chief.

During the address, Horrigan discussed the challenges Akron faces as it embarks on a period of economic recovery and systemic change. He detailed his planned initiatives and goals for the City in 2021 and beyond, including Akron’s $153 million distribution under the American Rescue Plan.

With COVID numbers surging due to the Delta variant, Horrigan announced last week that Akron is resuming its mask mandate for staff and visitors at all city buildings. The decision came as Summit County’s rate of COVID-19 infection nearly doubled in less than a week and moved the county to the “substantial” level of spread, according to the latest data from the CDC.

Dan Horrigan is the 62nd Mayor of Akron, currently serving his second term. Proceeds from tonight’s event will benefit the Russell M. Pry Memorial Scholarship at The University of Akron School of Law, in honor of Mayor Horrigan’s friend and mentor, the late Summit County Executive Russ Pry.

You can watch Monday’s entire event in the player below: