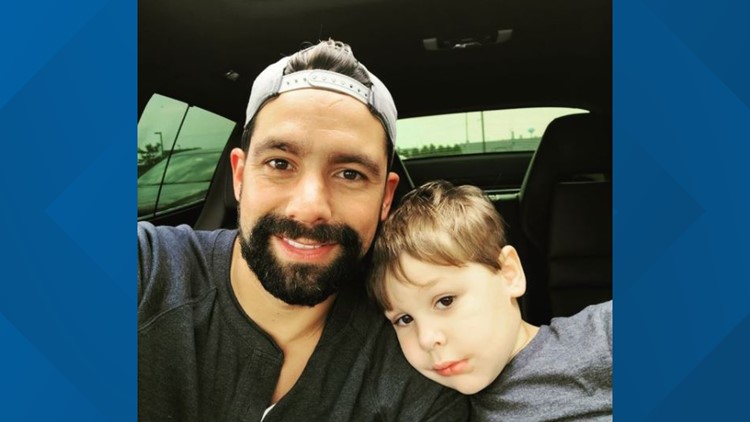 Allio, 37, said he felt ‘conflicted’ and ‘at war with himself’ over being away from his 4-year-old son, James

AKRON, Ohio — Akron’s Michael Allio cut his own time with The Bachelorette Katie Thurston short, but said if he could have a second chance with her, he’d take it, in a two-part episode of the reality dating show that aired on Monday night.

In an abbreviated episode focused only on Michael saying goodbye, the 37-year-old single father caught Katie completely off guard by telling her that he had to go home to be with his 4-year-old son, James, who had told him he thought his ‘Daddy didn’t want to see’ him.

‘It’s breaking me that I’m here when he’s thinking that,’ Michael told producers on the show.

Katie accepted his decision, telling Michael: ‘As selfish as I want to be, and I want to beg you to stay, I just know that’s not an option.’

Appearing on the ‘Men Tell All’ special, which aired immediately after their abrupt goodbye, Michael shared that if Katie would have him, he’d like to have a second chance with her.

RELATED: The Bachelorette’s Michael Allio reveals he told Katie Thurston he won’t move out of Ohio, on the 3 Things to Know with Stephanie Haney podcast


Unfortunately for the entrepreneur and philanthropist, Katie shot that down by telling him she had to move on when Michael chose to leave the New Mexico resort where their love had started to blossom.

Could the franchise be setting up The L4 Project founder to be the next Bachelor? It sure seemed like it, especially with Michael’s comments from the hot seat, while being questioned by cohosts Kaitlyn Bristowe and Tayshia Adams.


Michael told Katie in New Mexico, ‘You taught me how to love again,’ a sentiment which he repeated during the Men Tell All special.

He shared that he before meeting Katie, he didn’t think he’d even be open to finding love again after losing his wife, Laura, to breast cancer in January 2019.

‘There’s tons of hope out there for me now, and it really wouldn’t have existed if I didn’t take this leap,’ Michael told The Bachelorette co-hosts.

RELATED: Akron’s Michael Allio wins the hearts of Bachelor Nation while opening up about the loss of his wife on ABC’s ‘The Bachelorette’

RELATED: Akron’s Michael Allio takes a tough hit for love on ABC’s ‘The Bachelorette’ and opens up about the importance of time after losing his wife to cancer

When Katie came out on stage, Michael told her:

‘Going through this journey with you did help me understand that I can find love again. And you were so open and honest and welcoming with all the complexities that exist within my own life, and I trusted and still do trust that you would be fit for that role in any capacity.’

Katie was gracious in her response to Kaitlyn letting her know Michael would be open to possible romance, outside of the confines of the reality television show.

‘I have nothing but love and respect for Michael, but ultimately I could not dwell on the past,’ she said. ‘I had to continue to move forward, and my ending is ultimately how everything was supposed to happen.’

It was a stark difference from how she felt when Michael told her he was saying goodbye.

Although Katie was understanding of Michael’s decision to leave the show, she also said that she was mad and upset, and worried at the time that her chance at love was walking away.

‘What I’m looking for is to be in love and find my person, and it’s very possible that my person just left,’ Katie told producers on camera, after watching Michael walk out of her hotel room to get in a car and head home to Akron.

While breaking the news that he felt he need to go, Michael tried to reassure Katie that it had nothing to do with their relationship.

‘Something happened which kind of changes things for me,’ Michael told Katie. ‘Obviously, James is home, and I was FaceTiming him. He said [something] outside of the “Where are you? Why aren’t you coming home?” He said, “Why don’t you want to see me anymore?” And that’s … I can’t focus on anything else.

‘And with hometowns coming up, I feel like it’s wrong for me to give you half of what I could be. And it kills me, because I see so much with us and I know my decision to leave hurts you, too. But I’m going home because the beautiful boy needs his dad.’

RELATED: Akron’s Michael Allio wins the chance to introduce The Bachelorette Katie Thurston to his son James as 1 of 4 finalists on the reality dating show

RELATED: Akron’s Michael Allio is 1 of 7 men remaining in the competition for The Bachelorette Katie Thurston’s love

Katie was clearly shocked by this news, telling Michael: ‘I saw us going to the end, which makes this really confusing for me right now.’

Dedicated viewers, though, had to wonder about the timing with the show nearing its end, and how much longer it would have been before Michael and James would be reunited.

If the franchise is setting Michael up to be the next Bachelor, as many fans have been calling for since the first episode of this season, that would raise a whole new host of issues surrounding how to make that work so that he can still be there for his son.

Stay tuned for an upcoming interview with Michael, where we’ll get answers to your burning questions, on the 3 Things to Know with Stephanie Haney podcast.

RELATED: Akron man to appear on upcoming season of ABC’s “The Bachelorette”