Home » Al Roker in Cleveland: A ride down memory lane with Leon Bibb 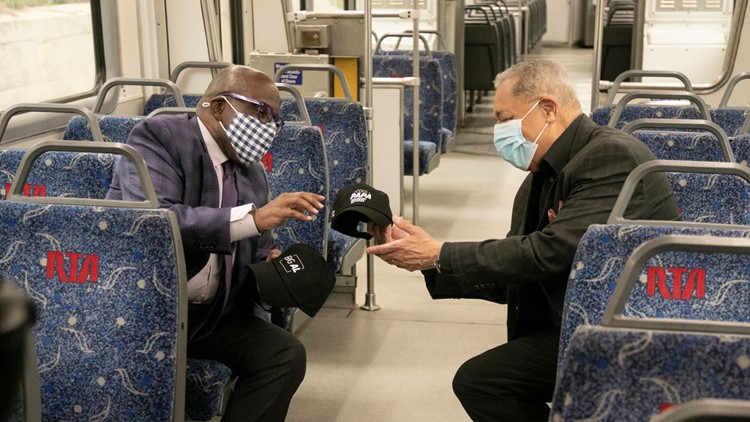 CLEVELAND — Had you been there, you might have thought you were in a theater watching a couple of comedians throwing out humorous lines to whoever would listen. There were quick one-liners and longer stories, which called for double-takes on the guy laying down the comedy. It wasn’t a theater, but the inside of an RTA Rapid Transit car rolling through Cleveland.

The guy getting the laughs was Al Roker, who in a few years would become a household name by handling the weather forecasting duties on the long-running NBC Today show. For about five years beginning in 1979, Roker rode the RTA Rapid Transit from his home in Shaker Heights to downtown Cleveland for his job at WKYC. That’s where I met Al. When I joined the television station and bought a home in Shaker Heights, we would ride in together.

The other day when Al came back to Cleveland to handle the Today show reporting duties on how Cleveland was doing as the city in trying to find its footing again after more than a year of the pandemic slowdown. Al and I figured it would be a good idea to ride the Rapid Transit again just as we had done when we were younger fellows just getting started in Cleveland television. 3News jumped at the idea and hustled aboard several cameras to record us.

RTA liked the idea, but because of the pandemic, gave us our own train. So without the old audience of fellow riders we used to have, we rode it alone except for the video crew and producer, Jessica Miller, who giggled as the two veteran broadcasters went back into their act.

RELATED: Al Roker praises Cleveland ahead of ‘Today’ visit: ‘It is literally my second home’

It really wasn’t an act in the old days. Al was always quick on his feet and fast with the one-liners. For fellow riders who always wanted to sit near us, there came ripples of laughter. Al hadn’t lost a step. I played straight man to his comic routine. I tossed him a line and he ran with it. Al’s patter was machinegun-fast. Once again, the old team was together again just as we had been an impromptu team in the 1980s before Al sought the bigger stage of New York and the network.

When my friend left Cleveland in 1984, there was an emptiness I felt. I’d climb aboard the Rapid at my Shaker Heights stop and ride the rails in relative silence. Passengers recognized me and always asked about the news. I always spoke with them about it, but that comic part of the team was in New York. So when Al and I got together for his brief stop in Cleveland the other day, we recreated the old act. Once again I played the role of the straight man to Al’s funny man routine. We had the video crew laughin’ in the aisles just as we had the passengers rollin’ on the rails years before.

I was Carl Reiner to Al’s Sid Caesar (If you don’t know about these two comedians from the 1950s and 60s, you ought to look them up).

After a few miles on the Rapid Transit, Al visited the WKYC Studios where some of the old gang, which is still in town or on the job at 3News, had gathered. Former reporters Joe Mosbrook and Tom Beres were there. WKYC director Al Wohl, assignment editor Lisa Lowry and video editor Gail Sapienza were there, too. So was Adam Miller, the WKYC News Director of Content. Adam and Al worked together when Adam was an important part of the producing staff of Today. We all gave Al a round of applause as he stepped into the studio. It was good to see our friend back where so much of his career took off. Both on the Rapid Transit and in the studio, Al talked about Cleveland and how it has rebounded from some tough days a few decades ago. He sang the praises of the Rock and Roll Hall of Fame and Museum, the Playhouse Square Theaters, Karamu Theater, the Cleveland Orchestra and the sports teams.

I got the idea he missed the town where he carved so much of a name for himself that WNBC Channel 4 in New York and the NBC network wanted him. Al Roker grew up in New York, so returning to that city was a return home. When he went there in 1984, his parents who lived in New York got a chance to see their son every night on the local news.

Al then went to work with his network crew, which had accompanied him to Cleveland. They were busy putting together stories on Cleveland, which will be shown on the Today. He promised to give us a high-powered report on how we in Northeast Ohio are doing. With that witty approach to his reporting, we will come out looking good. When Al Roker is describing the scene, you know it’s got to be filled with a bit of humor along the way.

The next time I ride the Rapid Transit, I’m sure I’ll hear the voice of Al Roker. He probably won’t physically be in the car, but I will hear the echoes of his fast-paced delivery. In fact, I can hear it now.  “Leon, let me tell you what happened to me today as I ran to catch the Rapid Transit……”

With that, every ear on the Rapid Transit turned to Al Roker. Everybody knew there was a punchline coming. Especially me.