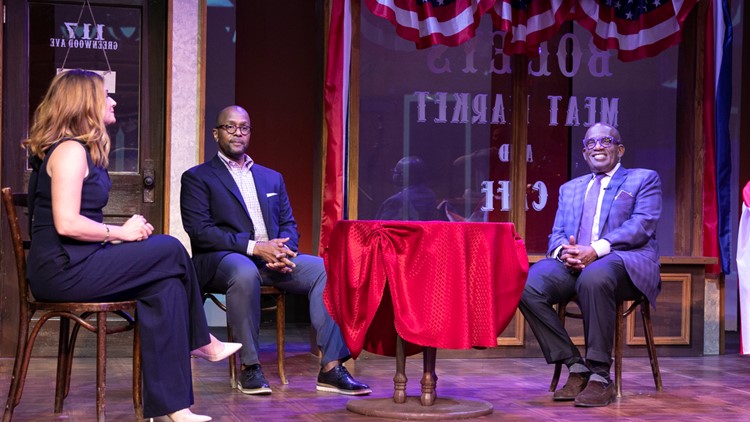 CLEVELAND — Cleveland is home to some of the country’s premiere arts institutions and our theater scene ranks high at the top of the list. With the second largest theater district in the country in Playhouse Square, and the nation’s oldest Black producing theater in Karamu House, there is no shortage of rich history and performances to explore. But like so many other industries, the world of theater was hit hard by the COVID-19 pandemic with most productions forced to shutter while the world sheltered in place.

So with Al Roker in Cleveland for Today‘s “Reopening America” series, we figured it was the perfect opportunity to check in with these beloved institutions to learn how they adapted during the pandemic and what they have planned for the (near) future. Al met up with GO! anchor Maureen Kyle to hear about their latest plans — and one thing is quite clear: When the world shut down, Cleveland theater got creative and started making big plans for the future.

“It’s been unusual but we’ve been quite busy here producing some virtual work,” said Tony Sias, President & CEO of Karamu House. “When we first started [virtually], we did a piece called ‘Freedom on Juneteenth’ and so our goal was to reach 10,000 people. Much to our surprise, in the first 24 hours we reached over 50,000 people.”

“Our arts education program is centered on a model called Sankofa and it’s looking back to understand where from whence you’ve come to better inform your future, your presence today.”

Sias says the future is bright for Karamu House.

Next up, Al and Maureen visited Playhouse Square where they sat down with President & CEO Gina Vernaci who explained that the organization had to quickly pivot in March of last year.

“On March the 2nd [of 2020] we announced to our 48,000 subscribers — we’re the largest subscriber base in North America, and 10 days later we were out of business facing a $7 million deficit for the year.”

But as Vernaci told Al and Maureen, the Playhouse Square Foundation also embraced virtual access and prioritized education initiatives during their shutdown.

“Our education department has taken every show that would have been here for schools converted it to a virtual experience,” she explained. “We have every school from the Cleveland municipal school district participating.”


Al pointed out that Playhouse Square was undergoing massive renovations and a ushering a new era of resurgence when he worked at WKYC Studios in the late 70s and early 80s. Vernaci says she can see parallels between then and now.

“You know, Cleveland has had a lot of renaissance over the years and the theaters have played an important role with that. Here we’ll be again as the place where people can come together in a joyful in a safe and healthy way to take us forward.”

In order to move forward, Vernaci shared more on their extensive health and safety guidelines, which are constantly adapting with new guidance from the CDC, medical experts and theater groups across the country.

“Our protocols are a 64-page document that go through the entire experience of coming to Playhouse Square, and the hand sanitizer and the training for the staff,” she said. “Just all the things that we’re going to go through backstage so we can welcome the cast members in a welcoming warm and safe way and the same thing for the audience.”

And Playhouse Square has some exciting ways to welcome back audiences in the works – starting with a limited capacity run of their first live production “The Choir of Man,” in June. The national production of “The Lion King” will kick off their new tour here in October. “It’s an exciting way to welcome back live theater in Northeast Ohio and beyond,” Vernaci says.

“They’ll be here for four weeks rehearsing, run for two weeks and then step off to their national tour right from this very stage.”

So what better way to celebrate the bright future of Cleveland theater, than by lighting up Playhouse Square’s iconic GE Chandelier? Gina, Al and Maureen were met by more friends from the GO! team as Dave Chudowsky, Hollie Strano and Danielle Wiggins were also there to do the honors. The group counted down as Al did the turned on the sparkling lights — a symbolic celebration of the performances, community and culture we’re ready to welcome back to Northeast Ohio.