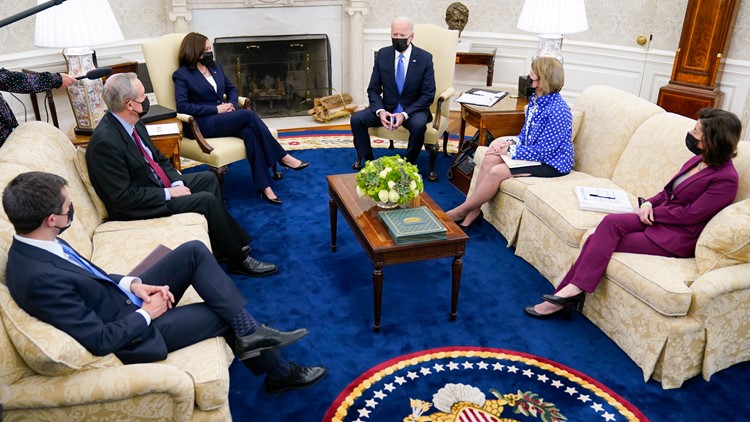 Thursday’s meeting comes as negotiations intensify over a potentially bipartisan proposal that could become a portion of an ambitious public investment plan.

President Joe Biden welcomed a group of Republican senators to the White House on Thursday to talk infrastructure as negotiations intensify over a potentially bipartisan proposal that could become one piece of the administration’s ambitious $4 trillion public investment plan.

Sen. Shelley Moore Capito of West Virginia, who is leading the group, said she expects to talk “very substantively” about the scope and cost of a potential plan, but would not disclose if she and the other senators are carrying a counter-offer to their initial $586 billion opening bid, which was panned by Democrats as insufficient.

As the senators gathered in the Oval Office, Biden called it a “good faith” effort to seek common ground.

Biden is intent on at least trying to strike a deal with Republicans rather than simply going it alone with a Democrats-only bill, which might in some ways be a more politically viable route in a Congress held by the president’s party with only the slimmest of majorities.

One strategy that appears to be coming into focus would be for Biden to negotiate a more limited, traditional infrastructure bill of roads, highways, bridges and broadband as a bipartisan effort. Then, Democrats could try to muscle through the remainder of Biden’s priorities on climate investments and the so-called human infrastructure of child care, education and hospitals on their own.

“I’m willing to negotiate,” Biden said Thursday at the White House before the afternoon meeting.

But the president has indicated that he’s not about to wait indefinitely for a compromise that may or may not come, and reiterated his view Thursday that “doing nothing is not an option.”

Thursday’s meeting followed a lengthy session at the White House with the congressional leadership the day before. Republican leader Mitch McConnell has said his side will accept spending as much as $800 billion, but the Republicans made it clear they would refuse to embrace Biden’s broad proposals or his idea of raising taxes on corporations and the wealthy to pay for the plans.

The White House outreach is part political strategy and part practical legislating. Striking a deal with Republicans would give all sides a political win — a rare bipartisan accomplishment — without fully forfeiting the president’s broader goals, which are largely shared by Democrats.

It also acknowledges the “red line” that McConnell has drawn against GOP votes for undoing the 2017 tax law by raising taxes on corporations or those earning more than $400,000.

Capito has taken the lead for Senate Republicans, keeping in close contact with both the president’s team and McConnell, she said, as she shuttles between the White House and Capitol Hill.

“We’re going to talk very substantively as to definitions of infrastructure and then, you know, I don’t know that we’ll get to negotiating the numbers, but I’m sure that’ll be part of the discussion,” she said before the meeting.

The West Virginia senator is no stranger to the legislative process, serving more than a decade in the House and now as the ranking Republican on the Senate Energy and Public Works Committee. She ushered a $35 billion bipartisan water resources bill to passage in the Senate and is hard at work with the panel’s Democratic chairman, Tom Carper of Delaware, a Biden ally, on a big surface transportation bill.

Biden personally reached out to Capito late last week after the water bill cleared the Senate.

“The president he expressed on the phone with me, and has with others, that you know he’s anxious to move forward,” she said.

“His desire is to define where we have common ground and I think we’ll probably spend the bulk of the time talking about that.”

Biden has insisted he doesn’t want working-class Americans to bear the “burden” of paying for all the new infrastructure investments alone, resisting GOP plans for taxes and user fees, like tolls, to fund the projects.

One potential new funding source could be the more than $1 trillion in unpaid taxes each year.

House Speaker Nancy Pelosi has mentioned tapping that potential funding source and she said Biden discussed it at their meeting Wednesday. Republicans have not resisted it.

“That’s a big chunk that would go a long way,” she said Thursday.

McConnell and House Republican leader Kevin McCarthy have insisted they want the infrastructure bills to go through the committee process, where lawmakers can hammer out the details and take ownership of the proposals, rather than have the package negotiated in their leadership suites.