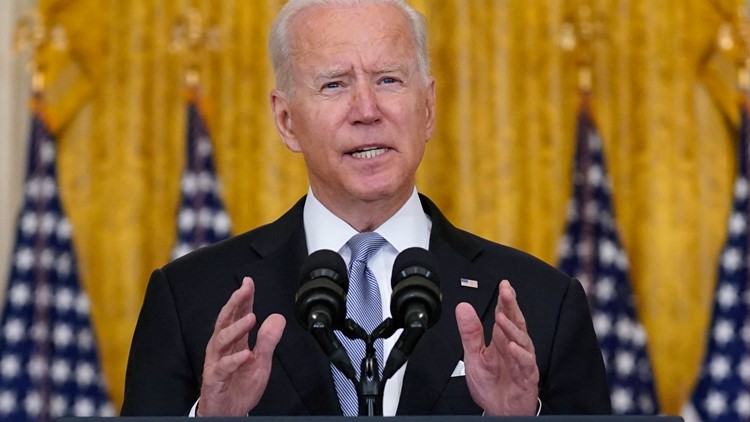 Hundreds of thousands of nursing home workers are not vaccinated, according to federal data, despite those facilities bearing the brunt of early COVID-19 outbreaks.

WASHINGTON — The Biden administration will require that nursing home staff be vaccinated against COVID-19 as a condition for those facilities to continue receiving federal Medicare and Medicaid funding.

Biden will announce the move Wednesday afternoon in a White House address as the administration continues to look for ways to use mandates to encourage vaccine holdouts to get shots. A senior administration official confirmed the announcement on condition of anonymity to preview the news before Biden’s remarks.

The new mandate, in the form of a forthcoming regulation to be issued by the Centers for Medicare & Medicaid Services, could take effect as soon as next month.

Hundreds of thousands of nursing home workers are not vaccinated, according to federal data, despite those facilities bearing the brunt of the early COVID-19 outbreak and their workers being among the first in the country to be eligible for shots.

It comes as the Biden administration seeks to raise the costs for those who have yet to get vaccinated, after months of incentives and giveaways proved to be insufficient to drive tens of millions of Americans to roll up their sleeves.

In just the past three weeks, Biden has forced millions of federal workers to attest to their vaccination status or face onerous new requirements, with even stricter requirements for federal workers in frontline health roles, and his administration has moved toward mandating vaccines for the military as soon as next month.

Biden has also celebrated businesses that have mandated vaccines for their own workforces and encouraged others to follow, and highlighted local vaccine mandates as a condition for daily activities, like indoor dining.

The new effort seems to be paying off, as the nation’s rate of new vaccinations has nearly doubled over the past month. More than 200 million Americans have now received at least one dose of the vaccines, according to the White House, but about 80 million Americans are eligible but haven’t yet been vaccinated.

Mark Parkinson, the president and CEO of the American Health Care Association and National Center for Assisted Living, praised the Biden decision, but called on him to go further.

“Vaccination mandates for health care personnel should be applied to all health care settings,” he said. “Without this, nursing homes face a disastrous workforce challenge.”

Last year CMS used similar regulatory authority to prohibit most visitors from nursing homes in an effort to protect residents.