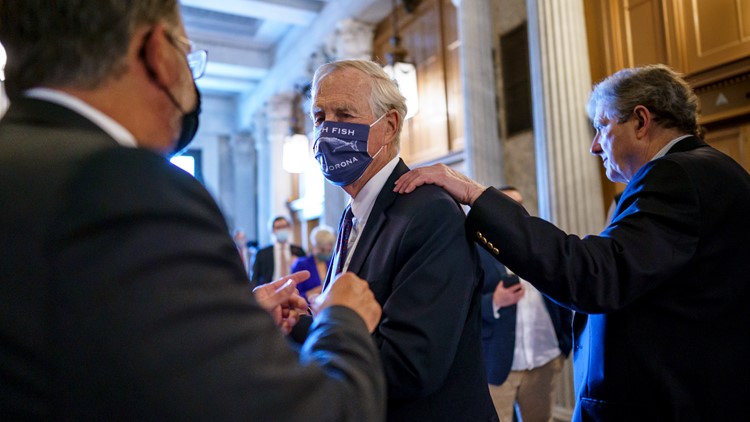 The full text of the bill was not finished by the time lawmakers adjourned Friday night.

WASHINGTON — The Senate further advanced a roughly $1 trillion infrastructure plan Friday with a bipartisan group of senators helping it clear one more hurdle and bracing to see if support can hold during the next few days of debate and efforts to amend it.

Senate Majority Leader Chuck Schumer, D-N.Y., said the chamber should be able to process the legislation quickly given the bipartisan support. But as the day dragged into evening, the full text of what promises to be a massive bill was not finished by the time lawmakers adjourned.

Senators will return for a rare Saturday session as they push through a lengthy process.

“We may need the weekend, we may vote on several amendments, but with the cooperation of our Republican colleagues I believe we can finish the bipartisan infrastructure bill in a matter of days,” Schumer said.

But Sen. John Cornyn, R-Texas, predicted, “It’s going to be a grind.”

The effort got off to a haphazard start Friday. Shortly after the Senate began the procedural vote, it was stopped. Cornyn said the reason was that some of the text in the draft bill did not comport with the agreement between the negotiators. The rare bipartisan work is testing senators’ ability to trust one another.

Several moments later, the vote resumed and the effort to proceed to consideration of the bill passed by a vote of 66-28.

Earlier this week, 17 GOP senators joined all Democrats in voting to start the debate, launching what will be a dayslong process to consider the bill. That support largely held Friday with Republican Leader Mitch McConnell of Kentucky again voting yes to nudge the process along.

But whether the number of Republican senators willing to pass a key part of President Joe Biden’s agenda grows or shrinks in the days ahead will determine if the president’s signature issue can make it across the finish line.

Cornyn said he expects Schumer to allow all senators to have a chance to shape the bill and allow for amendments from members of both political parties.

“I’ve been disappointed that Senator Schumer has seen to fit to try to force us to vote on a bill that does not exist in its entirety, but I hope we can now pump the brakes a little bit and take the time and care to evaluate the benefits and the cost of this legislation,” Cornyn said.

Schumer had hoped to introduce the text of the bill later in the day with supporters aiming to complete action before leaving for the August recess. Sens. Rob Portman, R-Ohio, and Kyrsten Sinema, D-Ariz., released a statement saying they were close to finalizing the legislative text and hoped to make it public later in the day.

“When legislative text is finalized that reflects the product of our group, we will make it public together consistent with the bipartisan way we’ve worked for the last four months,” the senators said.

The bipartisan plan is big, with $550 billion in new spending over five years beyond the typical highway and public works accounts. A draft circulating Capitol Hill indicated it could have more than 2,500 pages when introduced. It’s being financed from funding sources that may not pass muster with deficit hawks, including repurposing untapped COVID-19 relief aid and relying on projected future economic growth.

Among the major investments are $110 billion for roads and bridges, $39 billion for public transit and $66 billion for rail. There’s also $55 billion for water and wastewater infrastructure as well as billions for airports, ports, broadband and electric vehicle charging stations.

The outcome will set the stage for the next debate over Biden’s much more ambitious $3.5 trillion spending package, a strictly partisan pursuit of far-reaching programs and services including child care, tax breaks and health care that touch almost every corner of American life. Republicans strongly oppose that bill, which would require a simple majority, and may try to stop both.

On the other side of the Capitol, a bipartisan group of senators and representative gathered to voice their support for the narrower, bipartisan infrastructure effort and to encourage House Speaker Nancy Pelosi to allow a quick vote on it after it passes the Senate. However, Pelosi has stated there won’t be an infrastructure bill vote unless the Senate also passes the more ambitious package, too.

“I’m not asking Speaker Pelosi today to support the bill. I’m asking for something a lot more basic than that. I’m asking to give us a vote,” said Rep. Dusty Johnson, R-S.D. “Let us vote.”

Rep. Josh Gottheimer, D-N.J., also appealed for a stand-alone vote on the bipartisan plan because “that’s what the country wants.”

Schumer: We’ll ‘get the job done’ on infrastructure
Dallas firefighter accused of faking COVID to get time off work
Comment