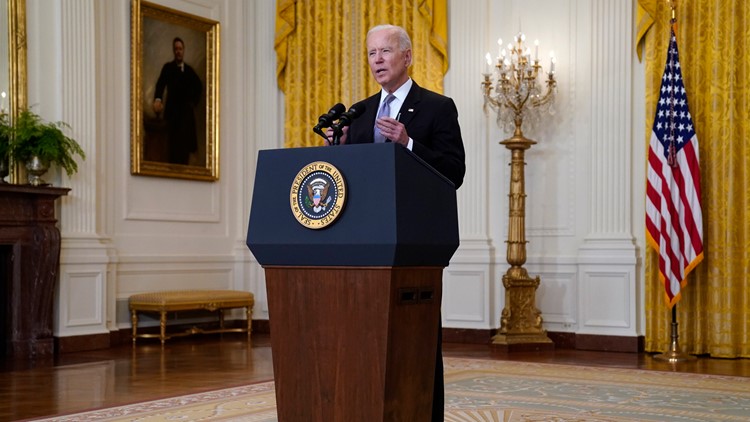 Stepped-back U.S. engagement already is encouraging countries to resolve disputes on their own. Fighting has flared recently in some of the areas.

Surges in violence and scenes of civilian suffering are testing President Joe Biden’s resolve to wrench America’s foreign policy focus and troops away from the hotspots of the Middle East and Afghanistan, and giving ammunition to Biden’s political rivals at home.

Biden and his supporters say that by shifting the U.S. military and diplomatic focus from the region’s bogged-down conflicts, he’s bringing an overdue end to failed policies that often only prolonged strife, and that the stepped-back U.S. engagement already is encouraging countries to resolve disputes on their own. But fighting has flared recently in some of the areas affected by Biden’s pivot.

The Israel-Gaza war has exploded just as Biden has tried to step back, creating scenes of crushed bodies and flattened homes and a growing rift in Biden’s own party about whether he should do more. Israel and Hamas announced a cease-fire Thursday in airstrikes and rocket attacks that have killed at least 230 Palestinians and 12 in Israel.

Fears of a Taliban takeover and renewed civil war are building ahead of Biden’s troop withdrawal in Afghanistan. And outside desert cities under siege in Yemen, Iranian-backed Houthi rebels are pressing an offensive as Biden ends U.S. military support for a 6-year Saudi-led war there.

“This is the fruit of the policy of U.S. President Joe Biden,” Yemeni journalist Walid al Rajhi tweeted this month after shelling from Iran-allied Houthi rebels on the walled city of Taiz. He was echoing a claim that fighters in a besieged Yemeni government stronghold, Marib, also are making to visiting news crews: that Biden’s military pullback and overtures to the rebels have only emboldened the Iranian-allied Houthis to press for decisive battlefield victories.

How resolutely Biden carries out the pivot, and what happens in the hotspots after will shape his foreign policy legacy.

Biden seems to be gambling that even if violence flares in the Middle East and Afghanistan as the U.S. shifts primary focus away, that’s a price worth paying to extract the U.S. from regional conflicts as greater challenges emerge elsewhere.

Blame already is in no short supply. “Americans’ decisions hurt us, and we hope that the Americans will go back on their decision,” Lt. Gen. Sagheer bin Aziz, chief of staff of the Yemen army, said in one such battlefield interview, with CNN.

Republicans say the same. Biden’s moves have “only encouraged Houthi aggression, a lesson the administration should remember with the Iranian regime,” Sen. Tom Cotton of Arkansas tweeted.

And as fighting between Israel and Palestinian militant groups surged to its highest level since 2014, heartland Democratic lawmakers this week joined progressives in pushing Biden to wade back into intensive U.S. diplomacy. “More will unnecessarily perish if America does not act with the immediacy this violence demands,” Rep. David Price, a North Carolina Democrat, told Biden in a letter signed by 138 others.

Israel’s announcement of a cease-fire came a day after Biden briefly and sharply increased public pressure on Israel, calling then for “significant de-escalation” within hours. Biden’s remarks Thursday praising Prime Minister Benjamin Netanyahu’s decision to “bring the current hostilities to a close within less than 11 days” were back in line with U.S. presidents’ strong support for ally Israel.

Biden calls it essential for the United States to pull back from its efforts to police Middle East conflicts and turn to dealing with long-term priorities. That includes competition with China and climate change.

“No one wants to say that we should be in Afghanistan forever, but they insist now is not the right moment to leave,” Biden said last month in setting a Sept. 11 deadline for U.S. military withdrawal.

“‘Not now’ — that’s how we got here,” Biden said of the 20-year U.S. deployment in Afghanistan that has left the Taliban still undefeated and the Afghan government still vulnerable.

For the administration and its supporters, the answer is pulling out of stalemated, costly wars, and managing Middle East diplomatic efforts so that foreign policy efforts don’t rack up air miles in years of fruitless shuttle diplomacy in peace processes that combatants often don’t want.

When it comes to Yemen’s war, for example, “At some point you have to accept what the facts on the ground are telling you,” said Sen. Chris Murphy, a Connecticut Democrat who met with Gulf and U.S. officials in a tour of the region this month. “The United States was involved for six to seven years, and Yemen during that period of time moved further and further away from peace.”

Since 9/11, “all we have done through fighting war after war in the region is to make our country less safe,” Murphy said. “So yeah, it may take some adjustment if the United States decides to remember how it protected its interests prior to 2001.”

The Biden administration points to intensive efforts by its diplomats for Yemen peace talks despite the end of military support. On Thursday the U.S. imposed sanctions on two Houthi leaders in the offensive on Marib.

Even before Biden came to power and sought to calm tensions, Arab rulers, including the United Arab Emirates’, had realized that teaming up in Trump’s maximum-pressure campaign on Iran had only spurred it and its allies to double down on attacks, said Ali Vaez, the International Crisis Group’s Iran project director and a former U.N. official.

“I do think that the United States is not looking at the region as a priority anymore,” said Marwan Muasher, a former foreign minister of Jordan. But some smart U.S. engagement will be crucial, he said.

“The Biden administration should not do more on the peace process” between Israel and the Palestinians, Muasher said. “It just should do things differently.”