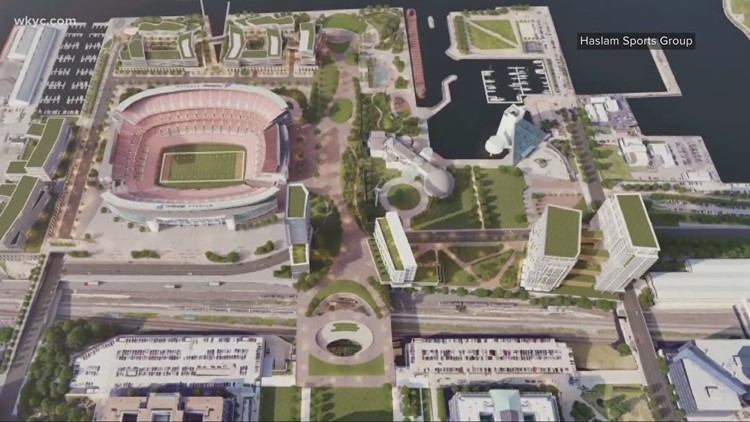 “What I like about this is that it’s not a parcel-by-parcel plan,” Council President Kevin Kelley said. It’s a comprehensive, grand plan, which is what we need.”

CLEVELAND — There’s a new proposal to develop Cleveland’s lakefront, and it comes from Browns owners Jimmy and Dee Haslam.

While there have been numerous plans and renderings before, City Council President Kevin Kelley says he feels this one maybe different.

“The reason this one feels different is that there is private sector buy into this one,” Kelley, who is also currently running for mayor, told 3News. “This isn’t all just public sector, and the fact that the Browns are so committed [is great].”

The proposal, organized by Haslam Sports Group and first reported by Cleveland.com, calls for a park-like land bridge over State Route 2 and the railroad tracks. The hope is to link the lakefront area around FirstEnergy Stadium, Great Lakes Science Center and the Rock and Roll Hall of Fame with the rest of downtown, specifically to the mall atop the Huntington Convention Center.

“We’ve been talking about this bridge for a long time now,” Kelly said. “Let’s get it done.”

Kelley says the plan was put into motion as part of an application for Transportation Review Advisory Council (TRAC) funding from the Ohio Department of Transportation, with the Haslams leading the charge.

“They definitely really wanted to drive this, and they’ve always been committed to developing the area around the stadium,” Kelley added.

Besides the land bridge connector, the renderings also reveal development all along the water, with buildings, plazas, terraces, a playground and more. The public access is one of the plan’s selling components for Kelley.

“How much public space does this add for regular Clevelanders?” he asked. “Are we making sure that this is open to the public, that people can use this bridge and that there are public spaces down around the stadium? I think if we do that, this can really be something that we support.”

The awarding of the TRAC funds wouldn’t come until sometime later this summer. Meanwhile, Kelley has scheduled a presentation for City Council’s Finance Committee on Monday to go over the proposal in more detail. However, so far, he feels this is about as close as the city has been to making moves along the Lake Erie shoreline.

“What I like about this is that it’s not a parcel-by-parcel plan,” he explained. “It’s a comprehensive, grand plan, which is what we need. That’s what makes this one different. It’s really just exciting to see something this big on paper and this far along [in] the planning stage.”