Home » Catching up with Solon’s Reggie Jagers after first Olympics 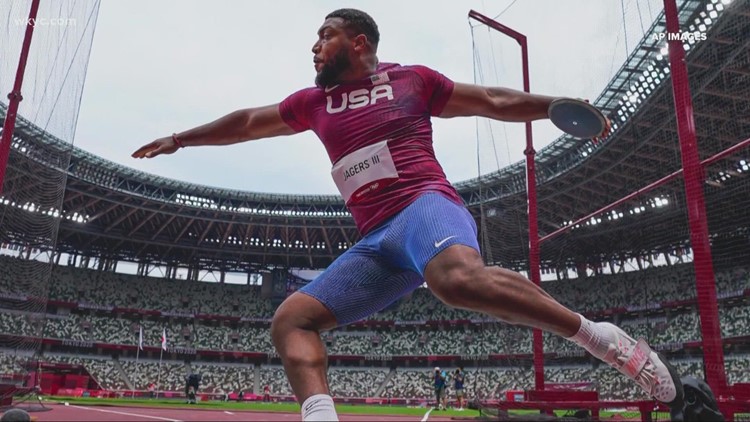 Reggie has competed at every level in his sport – from high school in Solon, to college at Kent State, and all roads led to Tokyo.

CLEVELAND — Reggie Jagers has been on a journey to the Tokyo games since before he first met 3News anchor Jay Crawford’s son Corey at the Olympic training center in Chula Vista, California back in 2017.

Corey was training in long jump, and Reggie in discus, and over the last year, they both had to adapt when everything shut down during the pandemic. Reggie also had to overcome a serious injury – a torn pectoral muscle.

He spoke with Corey in a recent interview for 3News about the challenges of the last year.

“I would say it’s been a long journey and it’s been pretty tough,” Jagers said. “When I finally became an Olympian, it was kind of like that still that one percenter type of goal that so hard to obtain. It’s not the norm either for even people who look like me in throwing, especially. I kind of feel like that’s a major accomplishment and I was able to make it to the Olympic team.”


Reggie has competed at every level in his sport – from high school in Solon, to college at Kent State, and on to the World Championships and the Pan-American games… but all roads led him to Tokyo.


Reggie says, he could feel the support all the way from Northeast Ohio.

“I kinda just loved the support, loved the people locking in with you on the journey. That’s why, when we were even out there, I was recording stuff because we can’t have spectators there. My family wasn’t there. So I wanted to make sure that everyone who supports me and knew who can see me competing.”

Unfortunately, Reggie did not qualify for the discus finals, and did not get a chance to compete for a medal, but he says he’s still proud.

“You have to try and, you know, do it the best you can. And, um, I feel like I did,” Jagers said. “I could have done a lot better in the meet….but I also gave my all this whole season like legit. So I was just more proud about the season progression. I’m like, whatever you did the Olympics, you know, you wish it would’ve been better, but you really overcame a lot of things that would’ve made people retire.”

But Reggie says his Olympic experience also has him thinking about his original dream – to play in the NFL.

“I’m very goal orientated….So I said I wanted to become an Olympian. And then you can just think about the NFL if you want, because you could use that status to possibly open up eyes to show your potential in another sport,” he said. “And if you look for the opportunities you find solutions…So I’m trying to look for opportunity.”