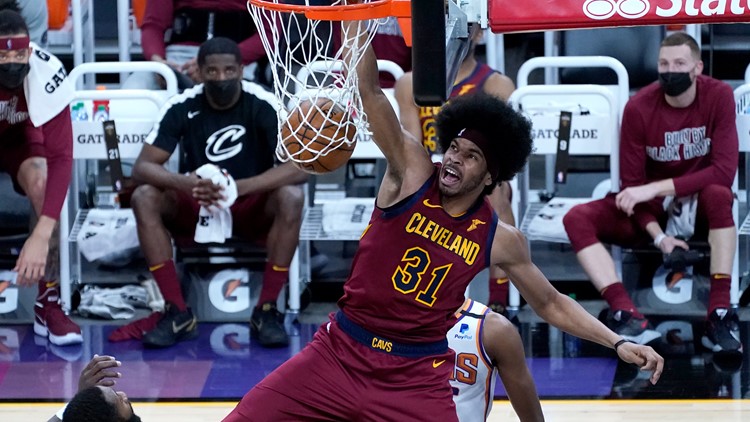 According to Yahoo Sports’ Chris Haynes, the deal is worth $100 million over a total of five years.

CLEVELAND — Editor’s note: the Locked On Cavs podcast in the video player above is from July 16, 2021.

Days after selecting Evan Mobley with the No. 3 pick in the 2021 NBA Draft, the Cleveland Cavaliers have made another “big” move.

The team officially announced Friday it has agreed to a new multi-year contract with center Jarrett Allen. Terms of the deal were not disclosed, but Yahoo Sports’ Chris Haynes reported Monday that it was worth $100 million over five years.

Through the organization, Allen released the following statement:

“It can’t be overstated enough that the coaching staff and front office wanted me to be in Cleveland long-term. I will forever be grateful for this opportunity and it’s an honor to continue representing the Cavs and becoming more entrenched into this community. I’m also excited about improving with my teammates. We have some really talented, young and hungry players in this locker room and I can’t wait to get back on the court with them to see how far we can take this thing.”

Initially selected out of Texas by the Brooklyn Nets in the first round of the 2017 NBA Draft, Cleveland acquired Allen this past January in a three-way trade that sent James Harden from the Houston Rockets to the Nets. Appearing in 51 games (40 starts) with the Cavs this past season, the 6-foot-11, 243-pound Allen averaged 13.2 points on 60.9 percent shooting, 9.9 rebounds and 1.4 blocks.

Entering the NBA offseason, the 23-year-old Allen was considered one of the top free-agent centers on the market, although as a restricted free agent, Cleveland had the ability to match any offer sheet he might have signed. In re-signing Allen, it appears the Cavs plan to pair him alongside 7-foot, 215-pound Mobley, giving Cleveland one of the league’s biggest — and youngest — frontcourts.

Why can Evan Mobley fit alongside Cavs center Jarrett Allen in a supersized frontcourt? Because of his ability to guard the perimeter on the defensive end along with the fact that he can really handle & pass at 7-0. Will eventually make 3s, too. A lot of length up front for CLE. pic.twitter.com/QiTA0cOOVr

“We spent the last few years maintaining our financial and roster flexibility to put ourselves in a position to acquire and now re-sign a player of Jarrett’s caliber. Since his arrival, Jarrett has fit seamlessly into our culture and almost instantly, he earned the respect of his coaches and teammates. We took another positive step forward in our pursuit of sustainable success with this signing, as we see Jarrett as an integral piece of our future moving forward.”

In addition to re-signing Mobley on Monday, the Cavs have also officially announced their acquisition of veteran point guard Ricky Rubio following a trade with the Minnesota Timberwolves. The rest of the offseason figures to be a busy one for Cleveland with forward Kevin Love’s future with the franchise uncertain and fourth-year guard Collin Sexton eligible for a contract extension.