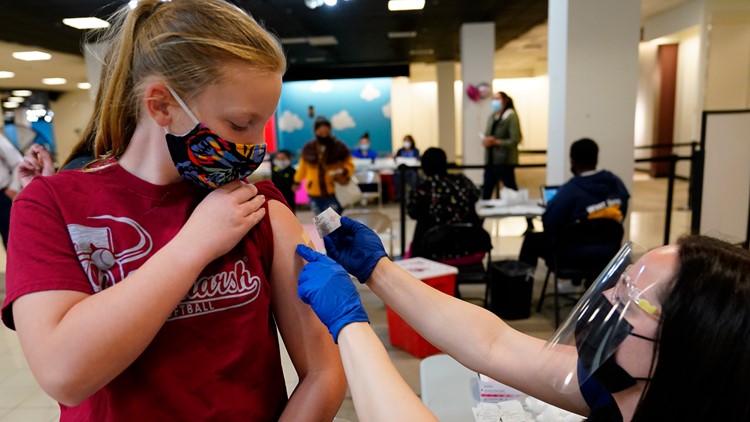 Many states will now be shipping doses to pediatricians and even to schools.

WASHINGTON — U.S. health advisers endorsed use of Pfizer’s COVID-19 vaccine in kids as young as 12 on Wednesday, just as expected new guidelines say it’s OK for people of any age to get the shot at the same time as other needed vaccinations.

The sprint to vaccinate millions of middle and high school students has already started in parts of the country, as a long line of kids rolled up their sleeves in suburban Atlanta for a first dose Wednesday. But much of the nation was awaiting recommendations by the Centers for Disease Control and Prevention that Pfizer’s vaccine, already used for months in those 16 and older, was a good choice for 12- to 15-year-olds, too. The CDC was expected to accept its advisers’ recommendation.

“It just felt like a flu shot, honestly,” said Meredith Rogers, a 14-year-old middle school student from Decatur, Georgia, after getting her vaccination.

Michelle Rogers, Meredith’s mother, said she hoped the youth vaccinations would help bring some normalcy back.

“A little apprehensive, but you know what? This is a step towards getting life back to normal so, we’re all in,” Michelle Rogers said with a slight fist pump.

Earlier in the week, the Food and Drug Administration authorized emergency use of the two-shot vaccine made by Pfizer and its German partner, BioNTech. A study of more than 2,000 12- to 15-year-olds found the same dose adults use is safe and strongly protective in the kids, too.

Among the outstanding questions: Is it OK to get vaccinated against COVID-19 at the same doctor’s visit as people receive some routine vaccinations? That’s an urgent back-to-school concern especially for the 12- to 15-year-olds, who have missed out on regularly scheduled vaccines during the pandemic — but also an issue for adults, too.


The CDC until now has recommended not getting other vaccinations within two weeks of a COVID-19 shot, mostly as a precaution so that safety monitors could spot if any unexpected side effects crop up. But the CDC said Wednesday it is changing that advice because the COVID-19 vaccines have proved so safe — and that health workers can decide to give another needed vaccine at the same time.

The American Academy of Pediatrics on Wednesday also endorsed the Pfizer vaccine for the 12-and-up crowd — and agreed that it’s fine to give more than one vaccine at the same time, especially for kids who are behind on their regular vaccinations.

In the Pfizer study, there were no cases of COVID-19 among volunteers given the two-shot vaccination compared with 16 in the group given dummy shots. Kids also developed higher levels of virus-fighting antibodies than vaccinated adults. Side effects are the same as adults experience, mostly sore arms and flu-like fever, chills or aches that signal the immune system is revving up.

Vaccinating Americans of all ages will be critical to getting back to normal, and there’s plenty of supply for the nation’s nearly 17 million 12- to 15-year-olds.

In addition to the mass vaccination sites and health department rollouts that were key for adults, many states will be offering kids more familiar options — shipping doses to pediatricians and even to schools.

Pfizer is not the only company seeking to lower the age limit for its vaccine. Moderna recently said preliminary results from its study in 12- to 17-year-olds show strong protection and no serious side effects, data the FDA will need to scrutinize.

As for even younger children, both companies have begun tests in youngsters ages 6 months to 11 years. Those studies explore if different doses are needed at the youngest ages, and FDA plans to hold a public meeting next month to debate exactly what evidence is needed.

When could kids 12 to 15 get the COVID vaccine?

Shots could begin quickly after the Centers for Disease Control and Prevention adopts the advisory committee’s recommendation.

President Joe Biden said last week that the administration was prepared to ship doses to 20,000 pharmacies around the country and directly to pediatricians as soon as the authorization was made.

Pfizer in late March released preliminary results from a vaccine study of 2,260 U.S. volunteers ages 12 to 15, which showed its shot provided protection for the younger group.

What are the COVID vaccine side effects for kids?

The kids enrolled in the study had side effects similar to young adults, Pfizer said. The main side effects are pain, fever, chills and fatigue, particularly after the second dose.

On Friday, Pfizer and BioNTech announced they had started the process to request full approval from the FDA for their mRNA coronavirus vaccine for adults 16 and older.

Pfizer and BioNTech said data to support its vaccine will be submitted to the FDA on a “rolling basis” over the coming weeks. The companies requested a priority review, which asks the FDA to fast-track the application within six months instead of the usual 10 months.

For most people, the coronavirus causes mild or moderate symptoms. For some, especially older adults and people with existing health problems, it can cause more severe illness, including pneumonia and death.

The United States has more than 32 million confirmed cases of COVID-19, according to data from Johns Hopkins University.

The Associated Press and Erin McHugh contributed to this report.