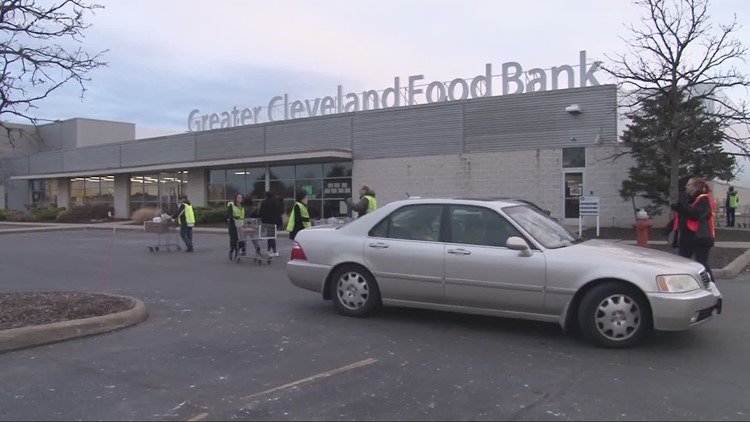 The money will come from the American Rescue Plan, a federal COVID-19 relief bill signed into law by by President Joe Biden this past winter.

CLEVELAND — Members of Cleveland City Council on Tuesday announced they will be introducing legislation to provide $5 million in additional funding for the Greater Cleveland Food Bank, one of the most recognizable charities in Northeast Ohio.

The money will come from the American Rescue Plan, a federal COVID-19 relief bill signed into law by by President Joe Biden this past winter. Specifically, the money will aid the food bank for its efforts during the pandemic.

“When you see people that are waiting just for the basic necessity of food, and you look at who stepped up to meet that challenge, it has been the Greater Cleveland Food Bank,” Council President Kevin Kelley, who is also running for mayor, said. “They have stepped up in this crisis like nobody else and really understood that this has real human consequences.”

Since the beginning of the coronavirus pandemic, the city says the Greater Cleveland Food Bank has served more than 400,000 residents, with roughly a third of those seeking assistance for the first time ever. With demand higher than ever, the charity made headlines with its drive-thru distribution events, notably from the Muni Lot.

“When the pandemic first started, we saw the need for emergency food skyrocket,” food bank president and CEO Kristin Warzocha said. “We tried to do the first drive-thru distribution at our facility on Waterloo in the Collinwood neighborhood, and very quickly realized that we didn’t have the space to accommodate the huge amount of need that we were seeing.”

So far, Mayor Frank G. Jackson has not specified how the city will allocate all of the money it received from the American Rescue Plan. Kelley says the administration is aware the food bank legislation will be introduced Wednesday and has been “supportive,” but admitted nothing has been finalized.

“You may accuse us of jumping the gun a little bit,” Kelley said, “but if I’m going to jump the gun for anybody, it’s going to be for the Cleveland Food Bank.”