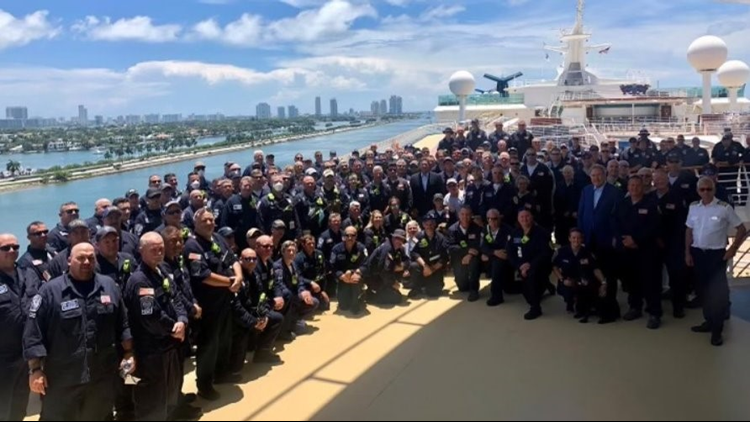 SURFSIDE, Fla. — Ohio’s Task Force 1 touched down in Miami Thursday evening to help search and rescue teams dig through what remains of the partial condo collapse.

The team is one of five federal teams traveling to Florida to help.

As the scene of the Miami condo collapse scene continues to unfold, the search is still long from over.

As of Friday evening, the death toll sits at 22 and 126 remain unaccounted for, according to officials.

Some of Greater Cleveland’s very own will begin their search shifts in the overnight hours of Friday into Saturday.

“Last night, we got into Miami just after 8, 9. Just over 24 hours of driving,” Bedford firefighter Brian Harting said.

Three other firefighters, from Euclid, Green, and New Franklin, are part of the 81 crew members that make up Ohio’s Task Force 1.

“We’ve been on alert now for about a week, New Franklin firefighter Rich Huggins said. “Everybody is ready to go,”

3News spoke with Harting as he prepped his bags, waiting for the call last Friday.

This time Harting was training to begin search and rescue early Saturday morning.

“We’ve been getting some information, trickling in from other teams,” Harting said. “It’s anything from general debris removal, to digging through the pile by hand, in some areas the concrete, slabs are in the way.”

The area is full of rescue teams and travelers for the summer, which is why the team is set to be lodged on a cruise ship.

“We hope not to be in there much, we want to be out there helping people,” Euclid firefighter Chris Caimi added.

The team told 3News a lot of work has already been done, with plenty of hands on deck But they’re ready to step in, lending a heavy, helping hand.

“It seems like Florida already has quite a bit of resources there at the site,” Green firefighter Josh Compton said.

“The mood is really eager to get out and get to work,” Huggins said. “[We’re] just itching to get down here and help out. That’s what we do as firemen.”

The force’s deployments are typically a minimum of 14 days, the team told 3News. Depending on the need, they could be out there longer.

Crews are also keeping an eye on the heavy storms headed towards the east coast. They are a hurricane rescue team as well, but said their main focus is the building collapse.

Editor’s Note: The below video is from previous reporting about local firefighters preparing to assist in Surfside