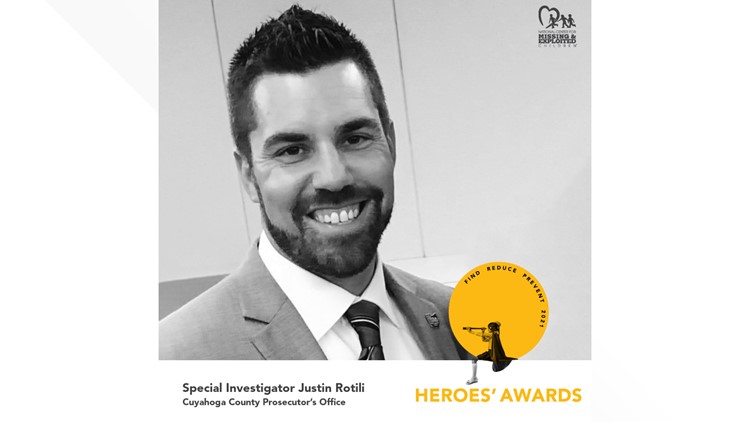 Justin Rotili doesn’t want people being afraid of social media, but education and reporting any tip is key, along with sitting down and talking to you children.

CLEVELAND — A special investigator for the Ohio Internet Crimes Against Children Task Force is working to share advice with parents on how to keep their kips safe.

His name is Justin Rotili, and he was just honored for putting a local predator in prison for 35 years. He told us the job is tough, but it’s a battle we can win.

“Nothing is easy about these cases,” he said. “Every case is unique. We have steps and procedures to follow to present a great case to our prosecutor so [there are] no missed steps when it comes time to a trial.”

Internet crimes are becoming more popular, especially during the pandemic. But with an uptick in cyber tips, detectives are able to track down more predators and put them behind bars.

“Since last year, we have seen a 30% increase in cyber tips due to the pandemic, with reporting internet services reporting crime over the internet.”

Rotili says predators can be right in front of our eyes.

“There is not just one common criminal,” he explained. “We see all walks of life, from pastors and teachers, councilman, public figures, you just don’t know who’s on the other side of that device, and it doesn’t matter what job you’re in.”

He says it starts with the parents, and educating can lead them in the right direction.

“The internet is not all bad,” he admitted. “The internet is a great tool, and I think [you need to] educate your children on how to be safe online, watch what [they] post, and how much information [they’re] giving out to the social media world, because you just don’t know who you’re talking to.”


Rotili clarifies he doesn’t want people growing up and being afraid of social media, but education and reporting any tip is key, along with sitting down and talking to your children.

“The parents are paying the bills, and they aren’t cheap,” he said. “You should have just as much access to that phone as your child does. I think knowing their password, knowing what they’re doing on social media, having rules. [Kids] shouldn’t be taking your phone into the bathroom, there’s no reason to have it in there. [Also have] access to that phone. You should know what they’re doing on the phone and what applications they are using.”

Rotili added parents should not try to be civilian detectives, and definitely shouldn’t create fake profiles to catch a predator.

“[There are] law enforcement officials and there are civilians, and we need to let law enforcement handle the investigations,” he said. “Please don’t be one of those who pretends to be someone else online. Leave that to the professionals.”

For investigators, the work can be rewarding, but it’s never done.

“Our work is never finished,” Rotili declared. “We love what we do, we’re passionate. When we get to put handcuffs [on a suspect], there’s no greater feeling than a job well done.

“[It’s] just such a reward to know that a kid is safe and future kids will be saved from the work we do. I don’t think there’s anything greater in this profession.”

Everything We Know About The Game So Far
Schitt’s Creek: Alexis’ 5 Best Traits (& 5 Worst)
Comment