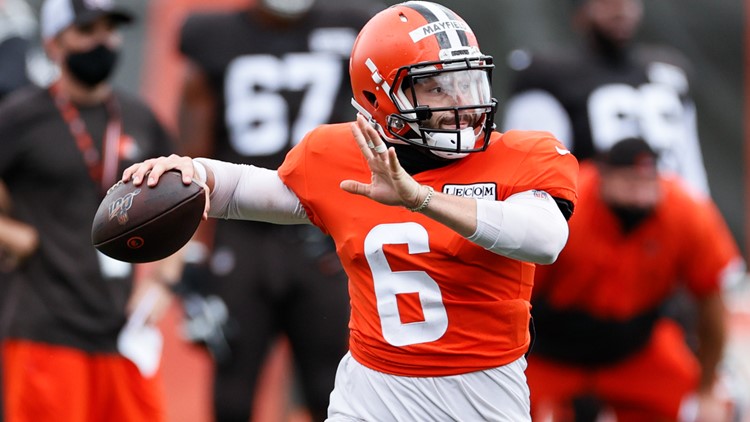 The Cleveland Browns will host their mandatory three-day minicamp June 15-17.

BEREA, Ohio — Editor’s note: the video in the player above is from a previous story.

The Cleveland Browns will kick off their three-day mandatory minicamp on Tuesday.

What follows are three key storylines to follow throughout the Browns’ minicamp in Berea, which will run June 15-June 17.

At this point a year ago, it was tough to tell who had less experience with continuity: the Browns or Baker Mayfield. While Cleveland’s lack of success at the quarterback position had been well documented, Mayfield had also come to become familiar with the unfamiliar; having played for four head coaches in his first three NFL seasons, you’d have to go back to the 2018 No. 1 overall pick’s junior season at Oklahoma in 2016 to find the last time he played for the same head coach in two consecutive seasons.

In 2021, however, that will change, with Mayfield back for his fourth season as the Browns’ starting quarterback and 2020 NFL Coach of the Year Kevin Stefanski entering his second season in Cleveland. With Mayfield opting not to attend the Browns’ voluntary workouts over the course of the past month, this week’s minicamp will mark his first chance to build on last season’s success with Stefanski, which saw Cleveland amass its best record and first playoff victory since the 1994 season.

For as much success as the Browns’ offense found in 2020, its defensive counterpart remained a work in progress. And Cleveland’s 2021 offseason reflected as much.

Depending on how certain position battles play out, the Browns could be breaking in as many as nine new starters on defense next season with defensive end Myles Garrett and cornerback Denzel Ward being the only set-in-stone returning starters. At the very least, Cleveland’s defense should experience an infusion of talent, thanks to the signings of safety John Johnson III, defensive end Jadeveon Clowney, cornerback Troy Hill and linebacker Anthony Walker Jr., as well as cornerback Greg Newsome II and linebacker Jeremiah Owusu-Koramoah, who the Browns selected in the first and second rounds of the NFL Draft.

With so many new faces, this week’s minicamp could prove pivotal for Cleveland’s defense in terms of building a foundation for training camp. If nothing else, it will give defensive coordinator Joe Woods his first opportunity to work with his newest players.

Of all the players expected to be in attendance in Berea this week, few — if any — will receive as much attention as Odell Beckham Jr. Now entering his third season in Cleveland, the three-time Pro Bowl wide receiver is returning from a torn ACL that cost him the final nine games of the 2020 season, as well as the Browns’ two playoff games.

Having yet to live up to the lofty expectations he arrived in Cleveland with two years ago, Tuesday’s return to the playing field could mark a significant step toward Beckham and Mayfield building the chemistry they have seemingly lacked for the last two seasons. If nothing else, it will be interesting to see how the LSU product looks from a health standpoint — although if his recent social media posts are any indication, that shouldn’t be much of a concern.