It’s the five-year anniversary of the Cleveland Cavaliers’ 2016 championship parade.

CLEVELAND — Editor’s note: the Locked On Cavs podcast in the video player above is from June 17, 2021.

Speaking to reporters at the Cleveland Cavaliers’ media day in 2014, LeBron James shared a scene he hoped would play out during his return to Northeast Ohio.

“For me, I’ve had a vision of boats and floats going down E. 9th Street in a parade,” James said after re-signing with the Cavs following a four-year stint with the Miami Heat.

Three days after James and the Cavs beat the Golden State Warriors in Game 7 of the 2016 NBA Finals to cap off a 3-1 series comeback, downtown Cleveland filled with fans eager to celebrate — or in this case, continue celebrating — the city’s first major sports championship in 52 years.


Just as James prophesized, floats filled E. 9th street and made their way around town in front of what’s become widely accepted to be 1.3 million fans. J.R. Smith was shirtless, Tyronn Lue was rapping, Kyrie Irving was drinking and Kevin Love was carrying not one, but two, WWE championship belts.

At the end of it all, the team took the stage at Mall B to give speeches, with James stating, in part, the following:

Relive some of the best moments from the Cavs’ championship parade, five years later, with the slideshow below. 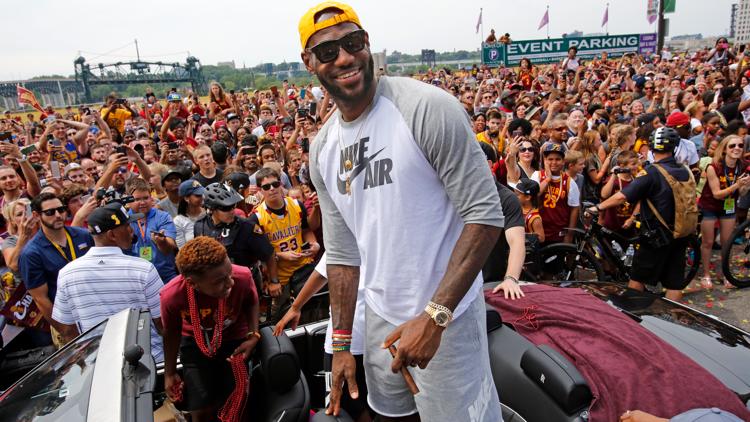 Cleveland Cavaliers land No. 3 pick in 2021 NBA Draft
GOP has blocked For The People Act. What happens now?
Comment