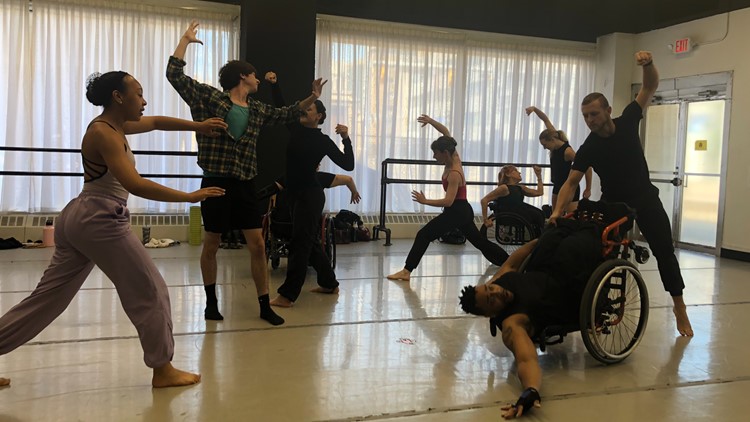 The world center for integrated dance and arts access unifies the talents of artists with and without disabilities.

CLEVELAND — On June 25, Cleveland’s Dancing Wheels Company will celebrate 40 years of uniting the talents of artists with and without disabilities during an in-person gala at Severance Hall.

The world center for integrated dance and arts access honors both the abilities of the body and the movement beyond perceived limitations.

“I never like to really be referred to as the guy in the wheelchair. My name is Craig,” says Dancing Wheels Company dancer Craig Sams III, who is known professionally as Lil Craig Of 2Reel. “I want to be seen as a human being.”

Lil Craig Of 2Reel was born with a rare disorder in which the lower end of the spine does not develop properly — but that didn’t stop him from becoming an entertainer.

After joining Dancing Wheels earlier this year, Lil Craig Of 2Reel arranged the music track and is the central character in one of the pieces being performed at the anniversary gala. The routine was choreographed by Keith Young.

That is why the movement sequenced in the Dancing Wheels choreography is the language Young is using to communicate the message that “it’s just as easy to be nice to someone as it is to be cruel.”

“What is mankind doing to each other? How can we make a choice to be kind to one another,” explains Dancing Wheels President and Founding Artistic Director Mary Verdi-Fletcher.

Through Dancing Wheels, Verdi-Fletcher, who was born with spina bifida, has been living out her vision of providing inclusive arts and recreation opportunities for all, making sure people with disabilities have full and equal access into the world of dance alongside those without a physical disability.

“We’re all working together as artists and we’re all sharing in our artistry together,” says Verdi-Fletcher. “So that element of sharing is something that our society needs to do more of.”

Young believes it would be easy for artists within the Dancing Wheels Company to separate into cliques but in his time working with them, he says they don’t separate but instead choose to work as one.

“They lead by example,” observes Young. “People in the audience if they see them working as one, they may want to go home and work as one.”

For Verdi-Fletcher, getting her company in front of the gala’s audience was the ray of hope she focused on when leading Dancing Wheels through the trials of the pandemic.

“Part of that light was to plan for this gala event, to know that somewhere, somehow we were going to do it.”

The gala is being called “First, Fierce and For Everyone.” Verdi-Fletcher says the name is to honor Dancing Wheels being the first physically integrated professional dance company, their fierce fight for the rights of people with disabilities and their desire to welcome everyone into their fold.

The gala will be held at 8 p.m. on Friday, June 25 at Severance Hall. General admission tickets are $40 per person and can be purchased through the Severance Hall Ticket Office. Additional ticketing options include live streaming for $100 per household and VIP access for $140 per person. Get your tickets HERE.