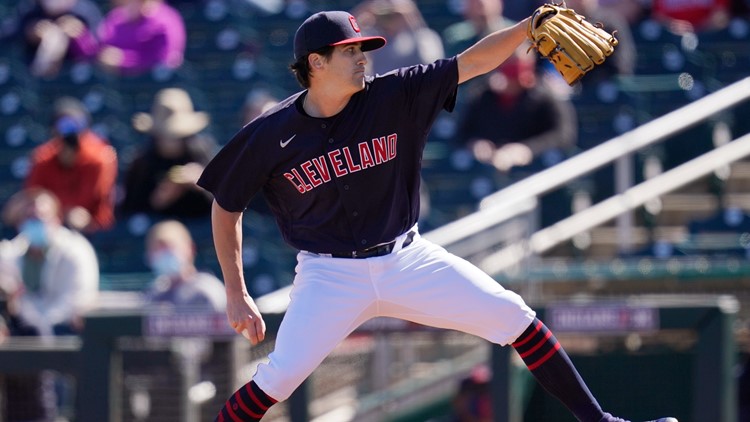 We sat down with Cleveland Indians pitcher Cal Quantrill for ‘Beyond the Dugout.’

CLEVELAND — Beyond the Dugout is back again this week virtually on Zoom. For years, 3News’ morning anchor Dave Chudowsky has been interviewing Indians players, coaches and staff during Spring Training in Goodyear, Arizona. The segments air weekly on GO! in the morning on Channel 3 and here on WKYC.com.

Due to the pandemic, Chudowsky did not travel to Arizona this year — but that is not stopping him from asking the tough questions you want answered. Well, not really! The questions are fun and help fans get to know their favorite players better.

After Nick Wittgren threw out the first pitch last week for Beyond the Dugout, we have another pitcher on the hot seat this week. Chudowsky talked with Indians relief pitcher Cal Quantrill, his first appearance on Beyond the Dugout. The righty was acquired by the Indians in a trade with the San Diego Padres in August of 2020, one of nine players in that deal.

Quantrill was born in Canada, and Chudowsky went with the obvious topic asking him if he was a hockey fan growing up?

Quantrill likes being close to home now since it’s a short drive from Cleveland and feels the differences between Canada and the United States might be smaller than people might think.

He told Chudowsky that he didn’t know much about Cleveland before being traded to the Indians — including that the Rock & Roll Hall of Fame is here. He didn’t get many opportunities last year to get the full tour with the pandemic, but said he looks forward to seeing more of the city this year.

“As things open up, hopefully I get to participate a little more.”

You’ll have to watch the attached video to see what the pitcher thinks about emojis and text messages. You’ll also find out why Justin Bieber is the one person he wants to meet!

Quantrill pitched in eight games, including two starts for the Indians last season, with a record of 0-0 with a 1.84 ERA. The 26-year-old has been solid again this year out of the bullpen. Quantrill was selected by the Padres in the first round (8th overall) of the 2016 MLB Draft. His father, Paul, is a 14-year MLB veteran pitcher.