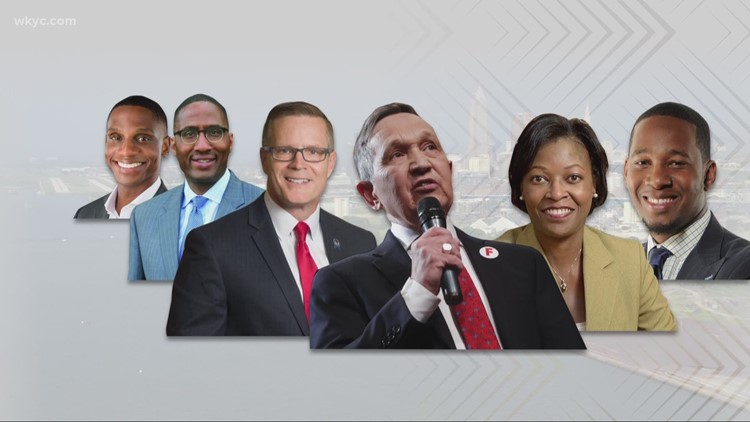 CLEVELAND — A night after participating in a debate co-hosted by The City Club of Cleveland and Ideastream Public Media, the seven people vying to become the next mayor of Cleveland took part in a forum Wednesday evening on housing and homelessness.

Co-hosted by nine homeless service providers and the League of Women Voters, the forum provided the candidates an opportunity to share their vision for housing and ending homelessness in Cleveland.

The conversation was moderated by Dr. Rosie Tighe, an Associate Professor in the Department of Urban Studies in the Levin College of Urban Affairs at Cleveland State University.

Candidate Dennis Kucinich spoke about his family’s struggle when he was a child and pushed for change within the city of Cleveland.

“As a child, I actually had the experience of homelessness,” said Kucinich. “There were times we lived in a car while we tried to find a place to rent.”

Candidate Basheer Jones says he had a similar experience as a child growing up in Cleveland.

“As a child we were unsheltered, we lived in the salvation army, right off of 30th next to TRI-C, at the time it was a shelter for women and children,” said Jones.

Jones says the reason was simple, his family simply couldn’t find a place to live. Jones says if elected,  he plans to create a Department for Homeless Services.

All seven Mayoral candidates say homelessness is a problem in Cleveland and they are finding ways to address it, including Kevin Kelley.

“There are mental health consumers that aren’t getting the services they need, substance abuse leads to a number of our homeless citizens,” said Kelley.

Kelley also cited poverty and lack of access to funds as issues that lead to homelessness.

According to the forum leader, 84 percent of residents experiencing homelessness are black and all seven candidates including Sandra Williams addressed it.

“We have huge wage inequities, $15 dollar minimum wage, I’ve suffered from that in Cleveland, we have slum lords where houses aren’t kept up and aren’t meant to stay habitable and lack of opportunities, getting a job when you don’t have an address…that’s a stigma. Too many hurdles.”

The issue of public housing was also addressed during the forum.

Candidate Zack Reed said, “I think it comes down to building more houses, more affordable houses, have policies in places to deal with the homeless problem, and the lack of affordable houses in the city of Cleveland.”

Reed says there hasn’t been a new home built on southeast side of the city of Cleveland in Ward One and Ward Two in the last four years.

Candidate Justin Bibb says there is a lot of work to be done. “We need to re-evaluate at a city level how do we have a voucher policy that prioritizes housing first versus allowing someone to be homeless chronically for nearly a year, that doesn’t make sense to me, we need to restructure that policy.”

You can watch the debate in the player below:


Cuyahoga County’s Primary Election will be held on Tuesday, September 14. That will be the day when Clevelanders will head to the polls and help decide who will be their next mayor to replace the retiring Frank Jackson. The primary is considered non-partisan, with the top two finishers moving on to face each other in the General Election on November 2.

Here are the Cleveland mayoral candidates who officially filed their petitions and will be on the ballot on September 14:

The deadline to register for the Cuyahoga County Primary Election is August 16. Click here for more information.