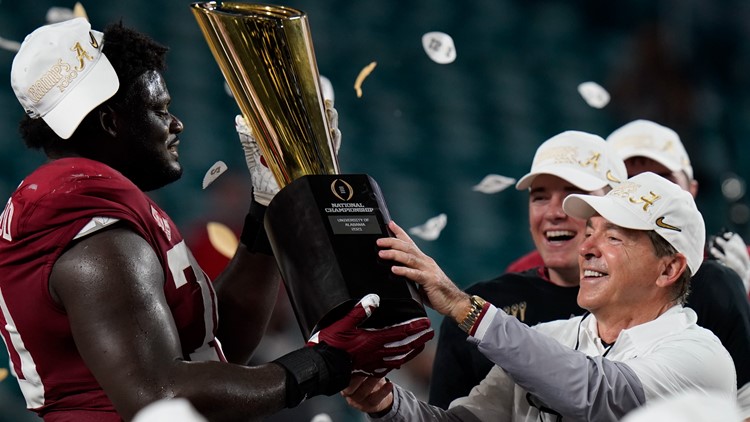 The College Football Playoff could be getting a major overhaul.

Editor’s note: The attached video is from Jan. 2021

The College Football Playoff would expand from four to 12 teams, with six spots reserved for the highest ranked conference champions, under a proposal that will be considered next week by the league commissioners who manage the postseason system.

A 12-team playoff would also include six at-large selections and no limit on how many teams can come from any one conference, a person familiar with announcement told The Associated Press on Thursday. The person spoke on condition of anonymity because the CFP has not yet released details.

A full announcement was expected later Thursday. Sports Illustrated was first to report a 12-team model was being proposed.

The CFP’s surprising disclosure comes a week ahead of a planned presentation to CFP officials in Chicago on June 17-18. It’s an important step in a process that has several more ahead.

If the presidents sign off, the next step is determining whether the plan can be implemented and when.

The College Football Playoff is entering year eight of a 12-year agreement with ESPN. The deal doesn’t lock in a format but an assumption has been that any changes would come after that deal expires following the 2025 season.

CFP executive director Bill Hancock has said no changes to the CFP format could be made this season or in 2022.

The four-team playoff was implemented in 2014, a natural progression from the Bowl Championship Series, which matched No. 1 vs. No. 2 in the title game from 1998-2013.

But the playoff’s popularity seems to have stagnated as only a few teams have grabbed the majority of the spots since 2014.

Alabama and Clemson have each made the playoff six times in seven years. Ohio State and Oklahoma have each been selected four times. That’s 71% of the playoff spots to just four of the 130 teams that play major college football.

A 12-team field with six spots reserved for conference champions would guarantee at least one team from outside the Power Five conferences would be in the playoff each season. The Group of Five has never had a team crack the field of four or been particularly close.