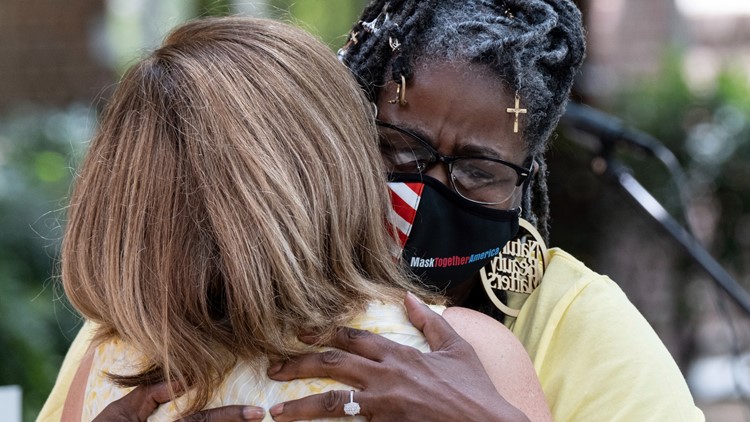 COVID survivors and other victims of the virus rallied across the U.S. Saturday, hoping to encourage more Americans to wear masks and get vaccinated.

ATLANTA — As her father lay dying last August from the coronavirus at a Georgia hospital, Lindsay Schwarz put her hands on his arms and softly sang him lines from their favorite songs.

Eugene Schwarz had been admitted three weeks earlier, but the hospital had not allowed his daughter to visit him for fear of spreading the virus. The 72-year-old looked nothing like the ebullient, crisply dressed cardiologist who used to kiss her on the forehead before heading off to work.

“I was hugging my father, and it didn’t really feel like my father,” Schwarz said.

Less than an hour after she was allowed to see him, he died.

Schwarz recalled the painful experience in a phone interview on Friday to raise awareness about the devastating impacts of COVID-19. She and other victims of the virus, including people who were infected months ago and are still experiencing severe symptoms, organized rallies in Atlanta, New York, Washington D.C., Denver and more than a dozen other cities around the country on Saturday to encourage people to get vaccinated and wear a mask.

Tanya Washington, who organized the Atlanta rally of COVID Survivors for Change, told about 50 people gathered outside a downtown church on Saturday that “COVID is still very much a part of our lives.”

“If it saves one person from hurting, just one person, it would have been worth it,” said Washington, who lost her father to the coronavirus in March.

She earlier recalled her harrowing final moments with him.

The rallies came amid a surge in infections around the country that are again straining hospitals, particularly in the South, where vaccination rates remain low. COVID survivors and those who have lost loved ones to the disease say they are frustrated by ongoing resistance to vaccines and misinformation about the virus.

“It has become a political issue, and it’s not about that. It’s a real virus, and it’s killing everybody no matter what political thoughts you have,” said Paula Schirmer.

Schirmer, 50, of Marietta, Georgia, her husband and three children contracted the virus in March 2020, but her symptoms have not gone away even more than a year later. She has difficulty remembering appointments and words — key to her job as an interpreter — and suffers from intestinal problems. The virus also took a toll on her mental health.

Schirmer’s husband was hospitalized for nearly two months, and she twice received calls from nurses informing her that he was in a critical state. The experience has left her with post-traumatic stress disorder, she said.

“It was awful not knowing what was going to happen,” she said.

The rallies also aimed to push lawmakers for financial and medical help for COVID victims.

Marjorie Roberts, 60, said she continues to require regular medical care for damage from COVID. She has lung and liver problems and lost seven teeth. She can now barely walk several blocks and sometimes has no energy hours after waking up.

“I was living my life like it was golden. I was traveling,” she said. “I literally have to start my life all over again.”

Because of the pandemic, Schwarz has put off traveling to New York to bury her father’s ashes at a cemetery where other members of the family have been laid to rest. That’s made it hard to move forward.

“It’s delayed closure,” she said. “I don’t want people to go through that.”