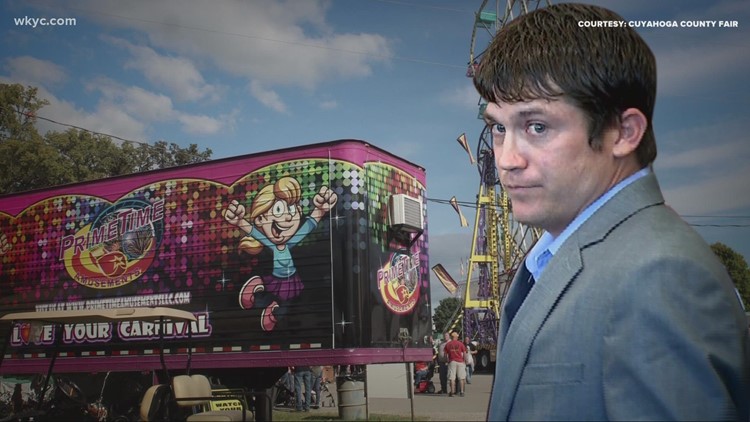 Prime Time Amusements and its operator Joshua Macaroni got a two-year contract despite past troubles.

CLEVELAND — Canceled last summer during the pandemic, county fairs are back, full of cotton candy, animals and amusement park rides.

The Cuyahoga County Fair kicks off Aug. 10 and is promising big thrills, thanks to a ride company making its debut at the Berea fairgrounds. But a 3News investigation into that company finds it has ties to a trouble past of safety problems.

In 2020, the Cuyahoga County Agriculture Society – which runs the county fair in Berea – signed a two-year contract with PrimeTime Amusements of Florida to bring rides to the midway. The company’s operator – a man named Joshua Macaroni – has ties to a company with a history of accidents and safety violations.

In 2013, while working for his family’s company called Family Attractions Amusement, Macaroni brought a ride known as the Vortex to a North Carolina fair. During one cycle, the ride came to a stop and the seat harnesses unlocked. The ride jerked forward, throwing several people from their seats, including a husband and father who suffered a broken neck and brain injuries, according to lawsuit filed after the incident.

Investigators accused Macaroni and an employee of tampering with the ride’s safety mechanisms. Macaroni was charged with assault and later pleaded guilty to obstruction of justice. But his special plea – known as an Alford plea – didn’t require him to admit guilt (He did apologize in court).

A judged sentenced him to five to 15 months in prison, though all but a month was suspended. Macaroni was also ordered to pay a $22,500 fine and the company agreed to pay the injured man’s family and lawyers more than $4 million, court records show.

In 2016, at a fair in Tennessee, a Ferris wheel operated by Macaroni’s family company malfunctioned, dumping three girls 30 feet to the ground. No criminal charges were filed, but the company later settled a lawsuit related to the incident.

In Alabama in 2018, the U.S. Occupational Health and Safety Administration OSHA cited PrimeTime Amusements for three violations, including one for failing to install “fall protection.” 3News went to the Cuyahoga Fair Board’s most recent meeting to ask what it knew about Macaroni’s safety history and why the board’s contract only lists Macaroni’s first name on the paperwork, making it difficult to vet his past.

Joanne Scudder, president of the fair board, said she and the board were aware of the Macaroni’s track record.

“We had that information when we were receiving bids from other companies,” she said. “It was obviously brought up when we did the bidding. I was the individual who asked them a question regarding that. He went ahead and told us all about it, and we had the supporting documentation as well.”

Scudder didn’t know why the contract only listed Macaroni’s first name, but said the board had the full contact information and insisted safety is top of mind.

“We always have concerns about everything we do, especially ride safety in light what happened at the state fair,” she stated.

Macaroni’s company shows off its attractions in Ohio just as a new ride safety law — known as Tyler’s Law — is being applied for the first time. It makes inspections of rides more stringent.

The Ohio Department of Agriculture oversees inspections of amusement rides and says Ohio has among the toughest safety requirements. The department declined to comment on Macaroni’s record, saying the department is focused on the rides in front of them.

“We conduct an inspection [on rides] to ensure at that moment that ride is in full compliance with Ohio’s laws and rules with regards to amusement ride safety,” Dave Miran, Chief of Ride Safety with the ODA, said.

3News called phone numbers listed in Cuyahoga County’s contract. The number next to a “Joshua” went to a voicemail box that is full. The other number, next the name “Amanda,” was answered by a woman, who didn’t say much before hanging up.

“You want to talk to us about issues from the past in a negative light?” she asked. “You think that’s smart to bring that up at a new fair. Really? Well, good luck.”