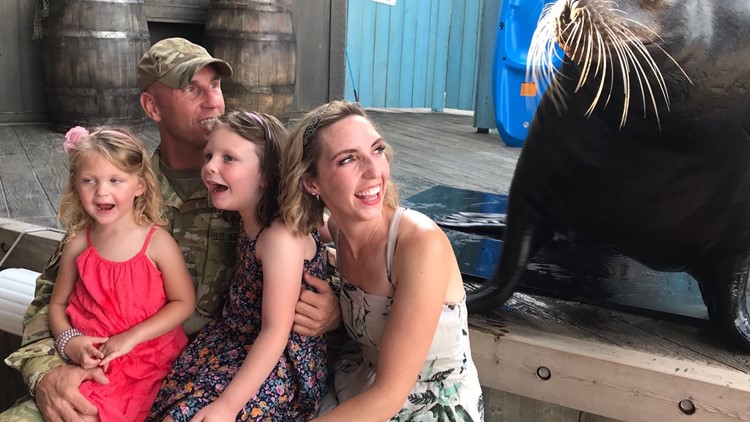 Kristina Murdock worked with the Columbus Zoo to surprise her two daughters after their dad just got back from serving overseas.

POWELL, Ohio — A central Ohio mother and her two daughters went to the Columbus Zoo and Aquarium for a day full of fun on Friday.

Part of the day included looking at the sea lions, feeding them and getting to take a picture with one.

The mother, Kristina, and her two girls, Scarlett and Amelia, were set to have their picture taken. But instead of the sea lion walking out behind them, it was the girl’s father instead.

After the photo was taken and the girls turned around, they saw their dad, Sgt. Nick Murdock, who had just gotten back after serving 11 months overseas.

Kristina reached out to the zoo to help plan the reunion. Scarlett and Amelia thought their dad wasn’t coming home until Saturday, but Kristina wanted to make the reunion special.

“It’s been a crazy day. It kind of felt like getting ready for a first date,” Kristina said. “We knew it was happening and kept watching the clock all day.”

Nick has been looking forward to being home with his family for a while.

“Every time I would go run on a treadmill, I would just have time to think and I would start thinking about this and start tearing up. So it was something really that was good to help me look forward to getting home and being with my girls,” Nick said.

To wrap up the reunion, the family ended up getting a picture with the sea lion.