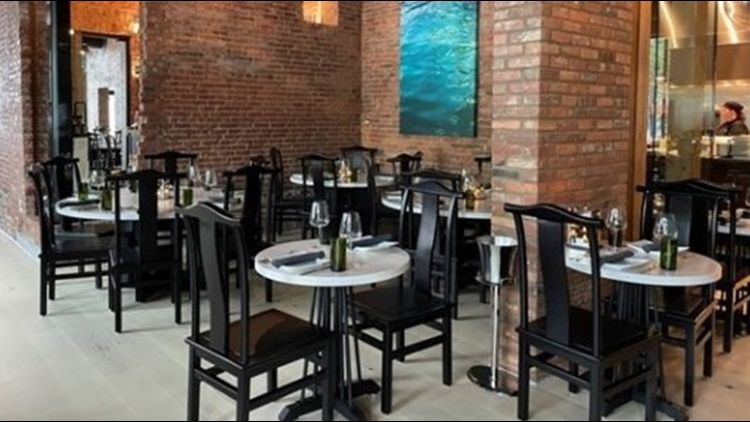 CLEVELAND — The transformation from XO Steaks to Acqua di Luca is complete and it is stunning. This new seafood-focused Italian restaurant from Lola and Luca Sema, owners of Luca and Luca West, is scheduled to officially open its doors on Monday, June 14. When it does, diners will have a wonderful new fine-dining restaurant to add to their repertoire.

Nearly eight months of construction has resulted in an open, airy and elegant space in the heart of Cleveland’s Warehouse District. More than simple cosmetic changes, the work involved stripping the nearly 140-year-old building down to the exposed brick walls, replacing floor joists, installing new wood flooring, moving the bar and even relocating the entrance. New fold-away windows and tastefully decorated wraparound patio bring the inside out and the outside in.

As for any similarities between this and the original Luca, which the couple opened in 2013 on the Superior Viaduct, there is little crossover. The menu stars impeccable fish and seafood in various dishes. To start, there’s a raw crudo plate with oysters on the half shell, sliced scallop, tuna and salmon. Shrimp cocktail is served with cocktail sauce and horseradish mayo. In place of the ubiquitous chilled seafood tower, chef Luca prepares an extravagant frutti di mare, a mountain of shellfish like lobster, scallops, shrimp, clams and King crab sauteed with wine, butter and herbs.

For the main event, there are nearly a dozen equally impressive seafood compositions. Whole Dover sole is pan-seared and glazed with brown butter and sage. Whole bronzini is enrobed in a saffron-scented béchamel sauce. Salmon is served with crabmeat and lobster ravioli. Meat-lovers are not left out in the cold. In addition to impressive cuts like Kobe filet mignon and slow-roasted elk shank sofrito, there are “surf and turf” dishes like osso bucco with shrimp scampi and filet served with a side of lobster gnocchi.

Lola is a trained sommelier who has assembled another extraordinary cellar filled with top-flight wines that pair well with the food.

The Semas opted to relocate the main entrance from the prominent corner at W. 6th and St. Clair, where it had always been, to the eastern end of the restaurant. The move, Lola explains, frees up prime real estate in the main barroom that gets lost to the host stand and come-and-go traffic. It also results in a larger valet zone.

It has always been a professional dream of the couple to open a restaurant in the heart of downtown.