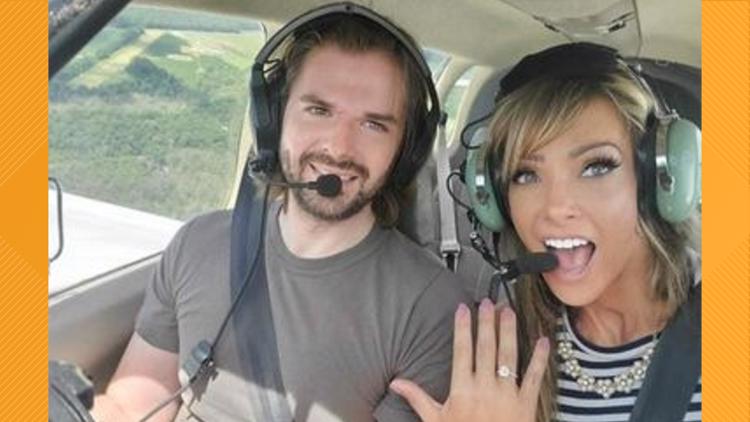 While flying in a plane with her boyfriend, Lucy Avant could see, “Lucy, will you marry me?” written on the ground below.

SUMTER, S.C. — A Sumter doctor and nurse have taken their relationship to the next step in an unforgettable way.

Garbalosa explained that they met working in the same office at McLeod Health.

Three years later, they’re happier than ever, working and living together. They’ve also leaned on each other as frontline workers during the pandemic.

“I think sometimes during the hardships you really see somebody’s true character and it definitely bonded us,” said Avant.

Garbalosa knew he wanted to pop the big question, and as a licensed pilot he figured out the perfect way.

Avant, clueless to his plans, explained that she “went and met him later and he had the plane all ready,” on a nice, hot day in August. “We went up and we kind of started circling and I was like, ‘Oh, we’ve kind of gone in circles a few times here,” she said while Garbalosa laughed beside her.

With the help of the Sumter community, the recreational pilot pulled off a proposal of massive size.

“I’m flying around, I’m circling, I’m trying to get her to look, you know, and we’re circling around… She’s not looking, she’s not looking,” Garbalosa said while they told the story of their special day.

“I was like, ‘Hey look at that runway down there, there’s something on it!’ And finally, she saw it and I gave her the ring and she cried and I cried,” Garbalosa said while choking up. “It was magical. It really was.”

The happy couple got engaged in the air thanks to a question written in giant letters on the ground.

Garbalosa arranged for “Lucy, will you marry me?” to be written on a grass airstrip in Sumter. A community member helped him write on the grass with paint used on soccer and football fields.

After she said yes on the plane, the engaged couple went to the field to see the words up close.

“We went back to where he had kind of mapped things out and to see it on the ground, the grandeur of it and capturing it with the drone made it even more special and made me appreciate it even more,” Avant said.

Garbalosa and Avant are waiting to decide on a wedding date due to COVID but hope to tie the knot next year.