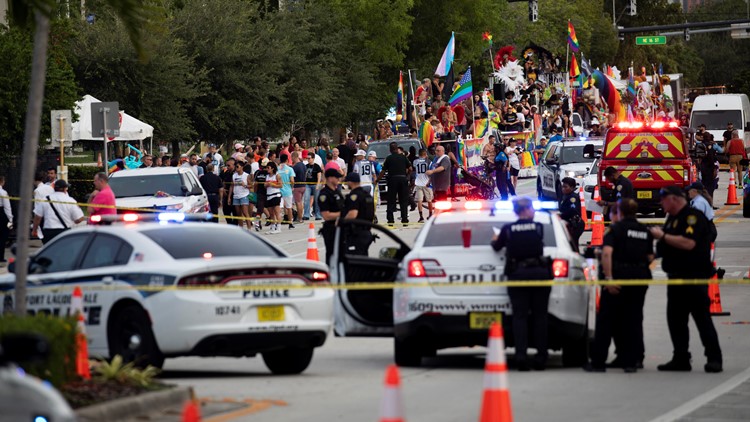 The driver is a member of the Fort Lauderdale Gay Men’s Chorus. Police say he accidentally ran his truck into the group, killing one and injuring two.

FORT LAUDERDALE, Fla — The 77-year-old driver who accidentally slammed his truck into fellow members of a gay chorus group, killing one and injuring two others at a Pride parade, said Monday he would hold the deceased “in my heart forever.”

Fred Johnson, a local minister and member of the Fort Lauderdale Gay Men’s Chorus, a tight knit ensemble of about 25 mostly older men, was at the wheel of a pickup when his group was signaled as next to join the parade. He suddenly accelerated forward, killing James Fahy, 75, and injuring Jerry Vroegh, 57, who was released from the hospital Monday. A third man, Gary Keating, was treated at the scene for minor injuries, according to a statement from Fort Lauderdale police.

Fahy and Vroegh planned to carry a banner in front of the chorus truck while other members walked behind the truck to hand out fliers.

“I love my Chorus family and the community and would never do anything to intentionally harm anyone,” Johnson said in a statement. “Please know that I hold my fellow chorus member, Jim Fahy, in my heart forever.”

Fort Lauderdale police also said Monday that all evidence indicates it was a terrible accident, noting Johnson had fully cooperated with the investigation and there was no evidence that drugs or alcohol were involved.

Chorus members said Johnson was always helping others and carried snack bags in his car to hand out to the homeless.

“I talked to him yesterday and today,” chorus member Bradley Bush told The Associated Press in a phone interview Monday. “He’s just really, really beside himself. … It’s going to be a burden that he’s going to carry the rest of his life.”

Bush said Johnson sang alongside him in the tenor section for more than a decade, adding “he’s an absolutely amazing person. He wouldn’t hurt a fly.”

Bush described Fahy as a sweet and shy man who volunteered in the community and was incredibly dedicated to the chorus, always promoting their concerts to outsiders. Fahy worked in the cruise industry, had a large network of friends and loved singing Christmas music, friends said.

The chorus hasn’t met since the accident. They typically rehearse on Wednesdays and Bush said he anticipated some sort of informal memorial to grieve privately. He said many in the group are numb and still in disbelief.

“We are a family,” said Bush, who has been a member since 2003. “You get close to them quickly because you’re on stage with them, you’re sharing weekly or more rehearsals.”

Crowd-goers waved flags and Mardi Gras beads Saturday night, anticipating what should have been a celebration of life and love South Florida gay community. But festivities quickly turned into terror as gleeful cheers were drowned by the sounds of sirens and crying children.

Witness Michael Albetta, regional director for Florida LGBTQ+ Democratic Caucus, was about to walk the parade route alongside U.S. Congressman Ted Deutch when he heard the truck’s engine unexpectedly revving.

“You hear the engine roaring and galloping with more speed. All of a sudden you heard ‘thump, thump, thump,’ and those were the bodies he was hitting,” Albetta said.

He said the truck narrowly missed U.S. Rep. Debbie Wasserman Schultz’s vehicle, somehow jumped the curb and came straight down on the victims, before careening into a fence on the opposite side of the road.

In the initial aftermath, parade participants and witnesses didn’t know what to think. A visibly shaken Fort Lauderdale Mayor Dean Trantalis initially declared it a terrorist act on the gay community. On Sunday, he clarified that it was an accident and said he misspoke the day before because he had been traumatized by what he witnessed.

Wilton Manors is a tight-knit community near Fort Lauderdale with a vibrant downtown filled with shops, where people line up for Rosie’s famous hamburgers or to gossip and drink at Georgie’s Alibi Monkey Bar.

June is Pride Month, commemorating a June 1969 uprising that followed a police raid targeting gay patrons at the Stonewall Inn in New York. It was a catalyst for the gay rights movement.

Easier in-person early voting and photo ID wanted by most in US
St. Pete bartender saves women from harasser with fake receipt
Comment