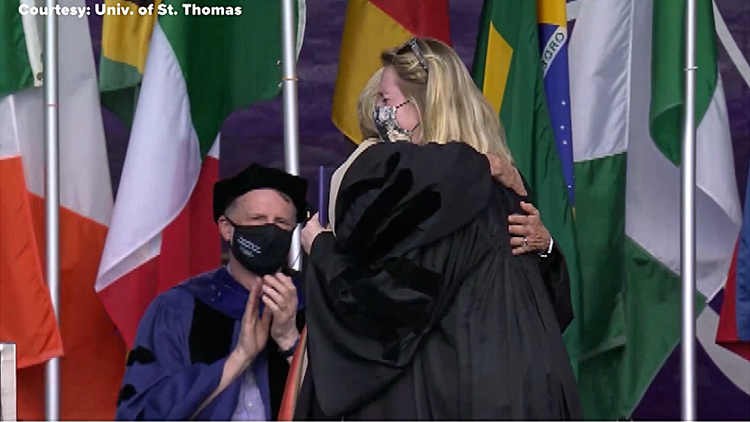 Police say one shooter is dead and another is in custody, as the University of St. Thomas reports one of its students are among those shot and killed.

MINNEAPOLIS — Minneapolis police said two people are dead and eight others injured in an overnight shooting in downtown Minneapolis.

In an evening press briefing, Minneapolis PD’s John Elder said one of the shooters was among those dead, and that another shooter is in custody.

The University of St. Thomas reports that one of its students, Charlie Johnson, a senior set to graduate from the School of Engineering today, is the second individual shot and killed.

“Our community is shocked and saddened by the news of Charlie’s death. We grieve with his family and friends and pray for their comfort. On a day he and his family should have been celebrating his graduation from our School of Engineering, we are devastated by this loss,” said President Julie Sullivan.

The university says the campus ministry and President Sullivan have been in touch with Johnson’s family, and honored him across all three of the school’s commencement ceremonies Saturday.

A family member accepted his diploma on his behalf, and a cap and gown were placed upon an empty seat among his graduating class.

With a cap and gown on an empty chair, a family member accepts the diploma for Charlie Johnson, a University of St. Thomas senior killed by gunfire in Minneapolis 15 hours before his graduation. pic.twitter.com/UE5EbqD6VN

The shooting – just one of several that happened overnight into Saturday – is bringing very little comfort to those questioning whether or not a return to downtown is even feasible at this point, as downtown leaders come up with new strategies to win people back.

“I think it’s going to be critical if downtown is going to survive what just happened. There’s so many companies that have essentially just sent everybody home and getting people to come back has been a great deal of resistance,” said Jim Kellison who has an office in downtown Minneapolis.

According to a series of posts on MPD’s Twitter account early Saturday morning, the shootings happened around 2 a.m. on the 300 block of 1st Avenue North.

An MPD news release said officers were working the evening bar closing time in the area when they heard the sound of a gunshot. Officers then ran to the area “and encountered an exceptionally chaotic scene,” the news release said.

According to the news release, police said ambulances were having a difficult time responding to the area because of the crowds, and additional law enforcement officers were called in to help from Minneapolis and surrounding communities.

Responding officers called the scene “very chaotic” – saying there were number of bodies laying on the ground. @kare11

MPD said the victims included five men and five women, all adults. In addition to the two men killed, one other man was in critical condition as of early Saturday morning. Seven others were being treated at hospitals in the area with what police describe as “non life-threatening injuries.”

MPD spokesman John Elder said “order (is) fully restored to the scene and surrounding areas” and there was no further active threat, and no other known victims.

According to the news release, the early investigation shows the shootings happened after “two people were standing in a crowded area and got into a verbal confrontation. Both individuals pulled out guns and began shooting at each other.”

Police are asking anyone with information about the incident to call CrimeStoppers at 1-800-222-TIPS (8477).

“Last night again brought tragic news,” Frey wrote. “Again, our collective conscience is shocked. Lives have been lost on our Northside and downtown. And we are left to process the reality that bullets have struck innocent bystanders, people welcoming the warm weather and celebrating being together again.”

Minneapolis police say they’re increasing patrols across downtown over the next few days in an effort to combat some of the violent crimes in the area.

This is a developing story. Stay with KARE 11 for updates.

EARLIER THIS MONTH: Six injured in separate shootings across Minneapolis