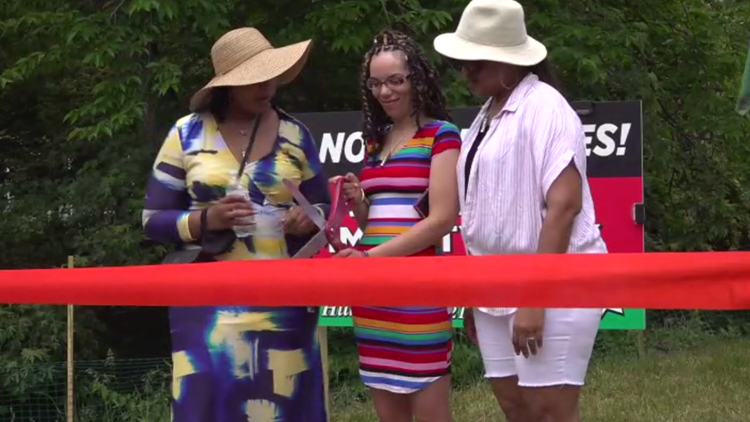 The Millennium Movement dedicated No More Names, Last Stand Community Park in honor of Hill, who would have turned 48 on Sunday.

COLUMBUS, Ohio — The Millennium Movement, an organization for justice, put together an event for Andre’ Hill, the man who was fatally shot by a now-former Columbus police officer last December.

Hill’s family, friends and community members gathered on Brentnell Avenue to honor him and his birthday.

Organizer LaToya Gibson said it was a day of celebration, with no protests, just another day of keeping his name alive.

After Hill’s family cut the ribbon in front of the park, the group moved to the Brentnell Community Center for games, music, food and dancing.

Hill’s sister, Shawna Barnett, was there and was part of the ribbon-cutting. She said it’s nice to see the community’s efforts to honor and remember her brother.

Barnett said Hill was a people-person, a community man who, if he was at the event, would’ve been the life of the party, ready to eat and play basketball.

She said he was a jokester and a talkative person.

Hill’s family grew up in the area and Barnett said the Brentnell Avenue neighbors are more than just friends, they’re family and have been there with them through the past five months.

Her hope moving forward, and her hope for the takeaway from the dedication is that everyone unites.

“We need to unite, we need to stick together. Everybody needs to come together for the common cause and the good and progress is always a good thing. You know, we’re not perfect, but we’re moving towards perfection. We’ll never get there but if we always work together we can make some kind of difference,” Barnett said.

Hill’s sister said the park and prayer creek is a place for serenity and for anyone to go and have a place to rest their minds.

How to Play the Mario vs. Bowser Mod in Among Us
How to Get the Blood Dragon Armor
Comment