Home » Fear in Gaza grows amid conflict with Israel 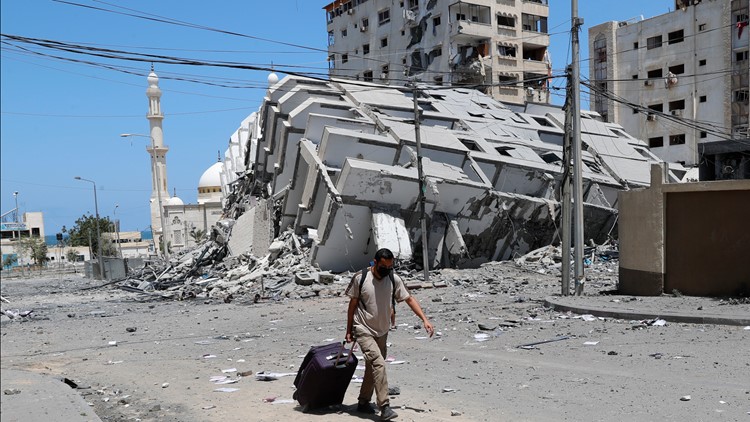 In Gaza, a crowded coastal enclave of 2 million people, there are no air raid sirens or safe houses.

JERUSALEM, Israel — Screams and flying debris enveloped Umm Majed al-Rayyes as explosions hurled her from her bed in Gaza City. Groping in the dark, the 50-year-old grabbed her four children and ran as Israeli bombs struck their apartment building Wednesday, shattering windows, ripping doors to splinters and blasting away concrete.

While casualties mounted this week in the most severe outbreak of violence between Israel and the Gaza Strip since a 2014 war, al-Rayyes and other Palestinians in the line of fire faced an all-too-familiar question: Where should we go?

“This whole territory is a tiny place. It’s a prison. Everywhere you go, you’re a target,” al-Rayyes said by phone from a neighbor’s house, where she sought refuge with her teenage sons and daughters and a few bags of clothes after the Israeli airstrike that she says came without warning.

In Gaza, a crowded coastal enclave of 2 million people, there are no air raid sirens or safe houses. Temporary United Nations shelters have come under attack in previous years of conflict. In the past two days, Israeli airstrikes brought down three huge towers housing important Hamas offices and some businesses after the Israeli military fired warning shots, allowing occupants to flee.

Fighter jets also targeted without warning multiple residential buildings, located in teeming neighborhoods where Israel alleged militants lived. In all, more than 65 Palestinians have been killed in Gaza since Monday, including 16 children. Among the dead were both militants and civilians, including at least two women and children who died during the apartment building strikes.

At a Gaza City hospital, distraught families told of pulling bloodied relatives from piles of rubble. One woman said her 4-year-old grandson and pregnant daughter-in-law were killed when an Israeli air raid hit their two-story building on Wednesday.

“They bombed them without any warning. The house had nothing but the kids,” Umm Mohammad al-Telbani cried in the hospital morgue.

The Israeli government long has accused Hamas of using civilians as human shields against retaliatory strikes; militants often launch rockets from civilian areas and set up command centers inside residential buildings. Yet Israel received heavy criticism for its tactic of bombing buildings during the 2014 war with Hamas.

Recalling the horror of past wars, Gaza residents say they feel nowhere is safe. They also cannot leave the narrow territory, one of the world’s most densely populated places. It has been under a crippling Israeli-Egyptian blockade since Hamas seized control in 2007. Along its borders, Gaza is encircled by sensor-studded fences, concrete walls, galvanized steel barriers and the Mediterranean Sea, where Israel restricts boats from Gaza to some 16 nautical miles offshore.

RELATED: Israel, Hamas escalate heaviest fighting since 2014 with no end in sight

“There is nowhere to run, there is nowhere to hide,” said Zeyad Khattab, a 44-year-old pharmacist in Gaza City, who fled to the family home where he grew up in the central Gaza district of Deir al-Balah with a dozen relatives when bombs pounded his residential high-rise. “That terror is impossible to describe.”

As Hamas and other militant groups fired hundreds of rockets into Israeli cities, including Tel Aviv, killing at least seven Israelis, worries grew that the latest violence could spiral into a protracted conflict. The Hamas barrages sent hundreds of thousands of Israelis running to bomb shelters across the country and hit numerous civilian targets, including a bus and a school in the city of Askhelon that was empty because authorities had ordered all schools closed.

The people killed by the indiscriminate fire at Israeli population centers included three women and two children, spreading fear on both sides of the border.

“There is always this undercurrent of anxiety, but this time is different,” Khattab said. Airstrikes shook the walls and windows of his apartment building during the devastating wars of 2008 and 2014, but the building that houses some 400 people collapsed on Wednesday.

In any other year, Palestinians would be thronging the dusty streets of Gaza City this week ahead of the Eid al-Fitr holiday, one of the biggest and most joyous festivals on the Muslim calendar that marks the end of the holy fasting month of Ramadan. Markets would be hives of activity as shoppers stocked up on new clothes and pastries for feasts. Beachside restaurants would brim with families. Barbershops would be full of men getting fresh haircuts.

Instead, shops stood shuttered and the city’s streets were eerily empty. Almost nothing moves on the roads except for ambulances and Hamas security vehicles. Bombs thunder in the distance. Plumes of black smoke billow from stricken buildings. Residents walk by rubble-strewn stores and downed power lines, surveying the latest damage to a city already riddled with scars from intense clashes.

“It’s the same atmosphere of 2014,” Saud Abu Ramadan, a freelance journalist in Gaza City, said, referring to the bloody 7-week war that killed over 2,000 Palestinians, including hundreds of civilians, and inflicted widespread destruction on Gaza’s infrastructure. “Warplanes are buzzing, and people are just trying to keep their heads down.”

This week’s mayhem stemmed from clashes at the most sensitive place in Jerusalem, the revered plateau site of Al-Aqsa Mosque and the iconic golden Dome of the Rock. Analysts long have considered flaring tensions at the compound, sacred to both Muslims and Jews, to be the most dangerous accelerant to the Israeli-Palestinian conflict.

Islamic militant groups seized on the violence at Al-Aqsa as the trigger for their hail of rocket fire into Israel. The salvos at times overwhelmed Israeli missile defenses and brought air raid sirens and explosions echoing across Tel Aviv, Israel’s biggest metropolitan region, and other areas.

On Monday, the first night of the fighting, teenage boys in Gaza City clambered onto rooftops, cars and scaffolding to get a better view of the rockets alighting the sky and streaming toward Israeli cities in quick succession. Some cried out with joy, as if at a wedding. Shouts of “God is great!” erupted from the crowd.

“People here have been seething,” Adnan Abu Amer, a political scientist at al-Ummah University in Gaza City, said. “They take a pride and happiness in seeing Hamas defend the sanctity of Al-Aqsa and Jerusalem.”

But with the rush of outrage comes the anguish of knowing the conflict’s heavy toll.

“There is so much pain, but thank God the children have been through this before and they’re strong,” said al-Rayyes, who fled her falling apartment in Gaza City. She corrected herself. “They’re pretending to be strong.”