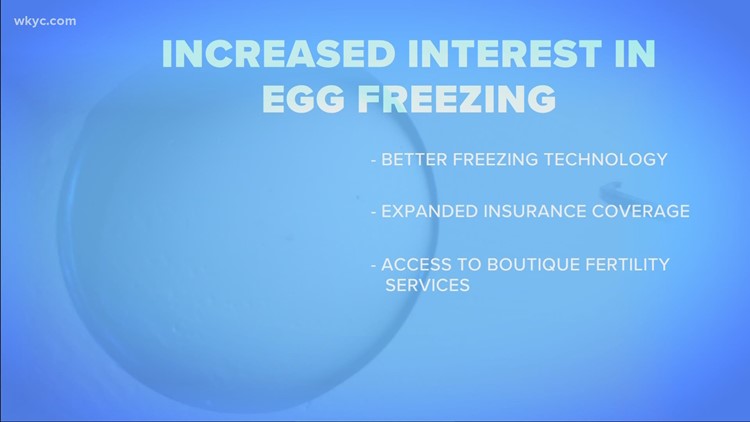 CLEVELAND — You may have seen it on reality TV, or come across a post on social media from a celebrity like Amy Schumer, but egg freezing is not just for the rich and famous.

More and more women are turning to modern science to better their chances of starting a family one day, including myself.

Along with people taking stock of their personal lives throughout the pandemic, Dr. Priya Maseelall with Reproductive Gynecology and Infertility credits the increased interest to better freezing technology, expanded insurance coverage, and access to boutique fertility services offered by companies like hers, with four locations in Northeast Ohio alone.

“Interest in egg freezing has grown tremendously,” Dr. Maseelall says. “I think one of the main factors for that is that in 2018, the American Society of Reproductive Medicine said that it was no longer an experimental treatment, usually reserved for people that are going through cancer treatments. It became offered to the mainstream public as a way to preserve their fertility.

“We’re seeing the tsunami effect of patients that know that this is a possibility for them and are interested in seeing what it takes to do it and how it can help their future.”

While the final procedure only takes about 15 minutes, I was personally surprised to learn that months, and even years of planning can go into the process.

When I first went into the doctor to try and freeze my eggs, I thought it was going to be a three-week process and then it would be done. That was not the situation for me at all, because of the results of my early diagnostic testing.

One of the first steps is an ultrasound to see how many eggs you might be able to grow, as Dr. Marjan Attaran, IVF Director at The Cleveland Clinic, recently explained on my 3 Things to Know podcast. The ultrasound shows how many antril-follicles are present in the ovaries.

“This antril-follicle has the microscopic egg in it, and the hope is that this follicle will respond to the drugs that she will be taking to grow her eggs,” Dr. Attaran says.

There’s also a blood test to estimate the potential success of the procedure, that measures a patient’s anti-mullerian hormone level.

“If the anti-mulllerian hormone is a higher number, it typically seems to indicate that there are more follicles that are present in this individual and that hopefully she will respond better to the medications,” Dr. Attaran says.

If you’re trying to freeze your eggs, doctors say that ideally you want that AMH level to fall between 2 and 7. Mine started out at .52, likely suppressed by the birth control pills that I’d been taking for years. Having such a low AMH level to start is what delayed me for seven months, while I waited for the effects of the birth control to wear off in my body and my AMH level to eventually rise to 1.82.

Dr. Maseelall says that early waiting period can vary greatly, from patient to patient, but as I learned, once you’re ready to begin, things move very quickly.

“Depending on what’s going on with that woman, whether she’s on birth control, what her age is, there’s different timeframes,” she says.  “The process of egg freezing itself is only about 7-12 days of  medicine, probably three to four visits [for monitoring throughout the injection process] and one egg harvesting [appointment]. So one missed day at work.”

For me that meant early morning monitoring appointments so I could get to work by 8 a.m., often leaving my apartment at 6:30 a.m. so I could be the first person seen for blood testing and ultrasounds.

Mastering the tools was a bit overwhelming at first, especially because you have to mix some of the medicines yourself.

But the scariest part, by far, was the idea of giving myself my own injections. I say “the idea” of giving myself my own injections because once I did it, I realized it really isn’t all that bad. Thanks to tips from friends over social media (which was a great perk of documenting the process in real time on Instagram and YouTube), I realized that it was a lot more comfortable to give myself shots in the thigh than it was in the abdomen.

The three shots that I had to inject myself with included Follistim, Menopur and Ganirelix. Follistim is a follicle stimulating hormone (FSH), which is a naturally occurring hormone in the body that promotes the growth of the follicles that contain the eggs. Menopur is another drug used to help your eggs grows. This is the one that I had to mix myself, and it’s a combination of FSH and luteinizing hormone (LH). Ganirelix is referred to as an “antagonist,” and it stops your body from ovulating during the process, so that as many of your eggs can continue to grow as possible, in hopes that they can be retrieved.

The final shot is what’s known as a “trigger shot.” It’s injected exactly 36 hours before the egg retrieval procedure, and it’s basically what signals your eggs to detach from your follicles so they can be retrieved for freezing.

It’s all part of the process to stimulate your ovaries to grow your eggs in the hopes that they can be retrieved and then frozen. It’s a big commitment to an unknown outcome.

When I went in for my first monitoring appointment on the day of my first injections, where the doctors tell you the baseline you’re starting from, I was so excited because I had 16 antril-follicles show up on my ultrasound. That’s the most that I’d had show up at any of my diagnostic testing appointments. On that day, I thought to myself that this was incredible news, and all of my eggs were going to grow well, and I’d have 16 eggs to freeze.

In reality, 10 days later, eight of my eggs had grown to point where they could be retrieved. That was a major disappointment for me in that moment.

I was let down because I knew at that time that for someone like me in her early-to-mid 30s, the odds of having a successful pregnancy from eight frozen eggs fell somewhere between 42 and 49 percent, and I also knew that it was possible that not all of those eight eggs would be mature enough to freeze.

Thankfully, the next day I got confirmation from the medical team that all eight of my eggs were able to be frozen. While that was a major relief for me, that is not always the case for every patient.

Dr. Maseelall says that age is the biggest factor when it comes to how successful people are with egg freezing, just like getting pregnant naturally, and that from a medical standpoint, freezing eggs earlier is better.

“[Often] people don’t think about egg freezing until they’re 35, or 38. And frankly, by then you may have to go through multiple cycles in order to get a dozen eggs or two dozen eggs that really have a good probability of being able to be used,” Dr. Maseelall says. “So the push is not only to egg freeze, but egg freeze early.”

For me, having frozen eggs feels like an insurance policy, because while I know I want a family, I’m still not sure when the right time for that will be.

This way, I know I’ve done everything I can do right now to give myself the best shot at making that happen when I’m ready, and while I hope I never have to use them, I’m glad my frozen eggs are there if I need them to try to start a family.