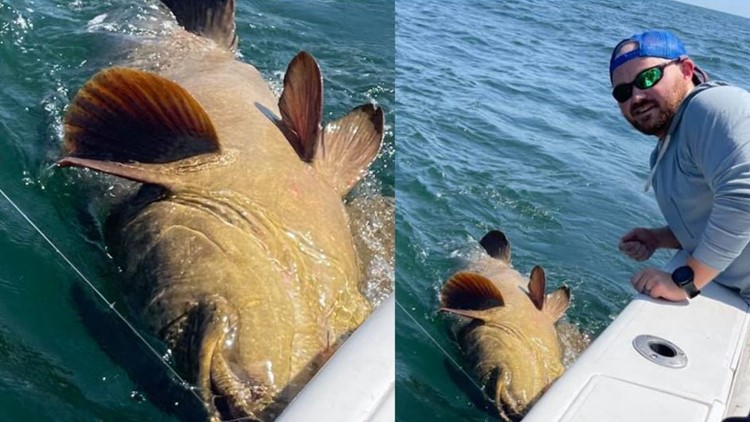 JACKSONVILLE, Fla. — This isn’t a fish tail: A massive Goliath grouper was reeled in after a hard fight off Florida’s coast.

Captain Bill Pollackov with Team Buck Rogers Charters was out on the open waters near Jacksonville with clients when the appropriately named fish caught them by surprise.

In a Facebook post, Pollackov says the group on board the Bill Collector were fishing red snapper when, toward the end of their trip, one of the rods doubled over while being reeled in.

The enormous creature on the other end of the line buried the fisherman in a hole and, at first, was believed to either be a big snapper or nurse shark.

After a more than 30-minute fight, some pretty tired fisherman came face-to-face with the 200-pound fish.

Pollackov says they made sure the fish was quickly released after snapping some pics of client Trevor McElhaney’s catch to abide by federal and FWC regulations.

“We came off the anchor and made sure this beauty swam down healthy and unharmed to steal bait another day,” he wrote on Facebook.

According to the FWC, the goliath is the giant of the grouper family and tends to live around 30 to 50 years.

How Many Episodes Are There (And When Is The Finale?)
Become Human Promotes Irrational Choices
Comment