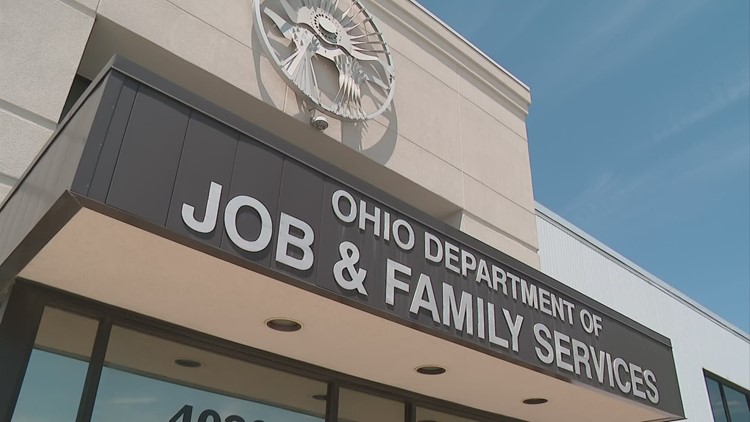 Pre-pandemic, the state says it would receive 20,000 calls a week. At the height of the pandemic it was dealing with 500,000 calls with 40 call takers.

Its president tells 10TV, the issues of staffing inside ODJFS were made long before the pandemic hit.

“The Ohio Department of Job and Family services cut over 600 claims representatives over the last 10 years,” Chris Mabe President of OCSEA, said.

Staffing levels are set, in part, by unemployment levels and Ohio’s unemployment numbers prior to the pandemic were low.

Still, the president of the employee’s union says warnings from him about staffing and other issues fell on deaf ears.

He said when the pandemic hit the system crumbled like a house of cards.

ODJFS spokesperson Bret Crow told 10TV, “Ohio relied upon temporary staffing to assist during short-term peak claim seasons, rather than increasing full-time staff members and thereby increasing payroll and benefits costs. In addition, the program transitioned to a more self-service business model for those claimants wishing to interact with the state using technology.”

When the pandemic hit Ohio in March 2020, Gov. Mike DeWine issued stay-at-home orders forcing businesses to close in an effort to contain the spread.

A recent 10 Investigates report explains how vulnerable the unemployment system was before and during the pandemic. This resulted in at least $2.1 billion in overpayments and fraud.

Stories of people not getting their claims processed in a timely manner, not receiving money and not being able to get answers from ODJFS employees are well documented.

Now, we are learning more about other symptoms of a broken unemployment system from those who once worked in it.

“I really had to apologize to these people and let them know it’s not like I don’t want to help you,” said Leila Phillips, a former ODJFS call taker.

From August to December of 2020, Phillips says she worked on the pandemic unemployment assistance side. That’s the federal program designed to help those who didn’t qualify for regular unemployment.

She says she resigned her position after she and her children got COVID, and she was unable to call into work when asked. ODJFS says it fired her for not following the rules.

Phillips said a lack of training prevented her from providing answers to questions from those calling the unemployment line about their claims.

“They basically had us answering the phones to transfer them, you answering this person was like ‘no I was just on hold for two hours. You are telling me you are going to transfer me come to find out where we are transferring them back to representatives just like us’,” she said.

“That’s synonymous with what we heard from a lot of customer service reps,” Mabe said.

ODJFS admits getting people trained quickly was an issue so it has to bring in former employees to fill the gaps.

“During the jobless claim surge last year (pre CARES Act funding), for example, the agency even brought back retirees to make sure subject-matter experts were readily available to offer tips to speed up the process to get needed unemployment benefits into the hands of Ohioans,” Crow said.

“That said, the amount of training required to be able to answer complex and detailed fact-specific unemployment claims requires time and experience, and we didn’t have the luxury of either as we responded to a historic surge in unemployment claims for out-of-work Ohioans who were hurting.”

Phillips says she received between three to five hours of training through a webinar.

A far contrast to what the state says is happening now. Today, ODJFS says it takes 16 days of training before a call taker goes live on the phone.

Phillips said, last year, instead of more training she got excuses.

Issues with staffing were just one of the problems that prevented the state from dealing with a tidal wave of claims. The state’s outdated 17-year-old computer system couldn’t keep up.

Ohio is now paying  $36 million dollars to Sagitec to modernize and streamline the tax/benefits and unemployment appeals systems.  The project isn’t expected to be completed until November 2022, according to the state.

A year later, Ohio has made improvements to its call center operations. It now has 1,150 people answering claims.

Interim ODJFS director Matt Damschroder said in April, more than 70% of claimants who talked directly to an agent completed their case.

That’s compared to less than 20% in January 2020 before the pandemic started.