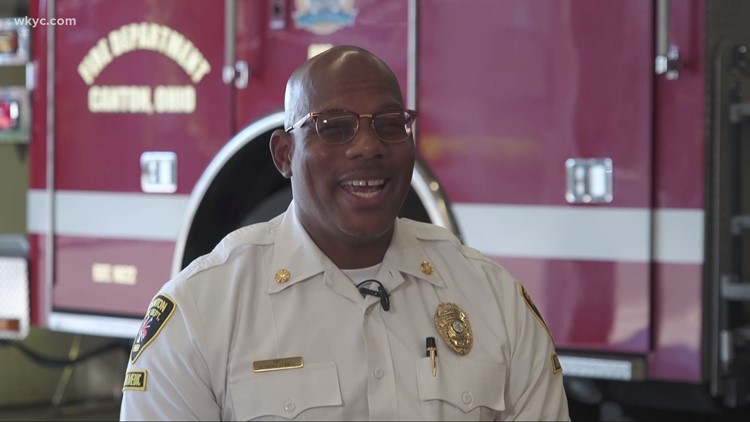 K. Akbar Bennett was sworn in last month, making him the first Black fire chief in the city’s history.

CANTON, Ohio — With a name like Kwameshallahu Akbar Bennett, the new chief of the Canton Fire Department says, he’s proof of the American dream.

“First name is African, middle name is Arabic, last name’s Irish,” he said. “I’ve got it all covered.”

Now he’s living out his dream by making history as the first-ever Black fire chief in the city’s history.

“My goal was never to be the first African-American chief. My goal was to always never be the last. What I mean by that is to get in there, do an amazing job and to do it on such a level that people don’t even think about my color anymore and it’s a back story.”

But the road to leading the 153 person department did have its challenges. Bennett says, unfortunately, he’s faced racism along the way.

“To me, racism is ignorance; it’s lack of knowledge of another culture, of who somebody is,” he said. “What makes you a bad person is what you do with that racism, because I’ve dealt with people who have been racist and ended up being some of my best friends in the world.”

Bennett, who turns 51 next month, is the youngest of 12 siblings. He credits his mother as his greatest influence.

In 2015, he was confronted with a situation no son ever wants to find himself in. He was on the job when he was called to his mother’s nursing home. She was suffering from a heart attack at age 64.

“I did CPR on my mom from the time of the nursing home to the hospital… It was tough because I wasn’t a son at that point. I was still the division chief and I still had a job to do.”

He said she was the reason he was on the job.

“I tell people I felt her spirit leaving her and then entering me to continue to create the strength that I have.”

His mother’s memory is now his inspiration. Bennett has big plans ahead to save lives: It’s called “Operation Heartbeat.”

“I would love to teach every male and female between the ages of 16 and up proper CPR,” Bennett explained. “Everybody in the city limits — everyone — so that when people come into the city of Canton it’s the safest city in the country.”

When he’s finished this dream, his next one is to write a couple of books, including one titled From Cheeseburgers to Chief. The title references one of his very first jobs, which was flipping burgers at a local Wendy’s just down the street from the firehouse.

“I used to walk to work every day and people would be making fun of me,” Bennett recalled. “For me, I’m thankful for all my experiences, but I had a mother that instilled that in me. I didn’t want to let my mom down, so it didn’t matter, you know, any kind of criticism that came my way, I’m gonna do it.”