A Buffalo firm says it’s losing $300,000 weekly and worries violence may result from those who confront bandits stealing used cooking oil from outside restaurants.

BUFFALO, N.Y. — It’s not a new crime, but it’s one that’s on the increase: the theft of used cooking oil from vats outside of restaurants.

In 2017 the National Association of Renderers estimated that $75 million in used cooking oil, referred to in the trade as “yellow grease,” was being stolen on a yearly basis.

According to a Buffalo-based firm involved in that industry, thefts are spiking for a variety of reason.

Founded 16 years ago by Sumit Majumdar, Buffalo Biodiesel pays 25 cents a gallon for the used cooking oil it collects from 18,000 restaurants in 12 states.

They clean and process it at their plant in Tonawanda, then sell it to refineries who ultimately produce bio fuels.

But in the last two years, thieves have been stealing it from their collection containers with increasing frequency

According to Majumdar, the recent theft of grease from a vat his firm provided to Pan’s Garden restaurant in Buffalo was just one of one of perhaps 20,000 such thefts of grease his firm had contracted to pick up in just the last two years.

“It’s being stolen because the value of used cooking oil is so high,” Majumdar said.

With federal mandates that an increasing amount fuel used for transportation must be infused with renewable sources to cut down on greenhouse gas emissions, it has increased the demand for such products, including yellow grease.

At the same time, the many restaurants that went out of business due to government forced shutdowns during the COVID-19 pandemic has reduced the available supply.

It’s also led to higher prices for the commodity.

“When the grease thefts first started a couple years ago, it was $2 and change per gallon for refined grease. Now it’s approaching, and now its approaching $4.50 a gallon,” Majumdar said.

According to Majumdar, thieves operating with a vacuum truck have been known to make up to $1,500 a day by first stealing the grease, then selling it on the black market for 10 times what he pays the restaurants to haul it away.

The grease thieves need willing partners in their enterprise, after all, noted Majumdar, “there are no pawn shops for this stuff.”

Instead, there needs to be a middle man who is willing to pay the thieves, then collect the grease and eventually sell mass quantities of it to an unscrupulous processor who will buy it without asking questions.

“We’re prepared to say this is being done through organized crime,” said Tom George, a retired Town of Evans police Lieutenant, whom Mujumdar hired a few months ago as his law enforcement liaison.

Part of George’s job is to help Buffalo Biodiesel deal with prosecutors and police agencies over a multitude of jurisdictions in the many states where it has customers.

Even if a thief is caught, they may not face serious consequences despite the lucrative nature of their crime.

While they may be making a good deal of money from the black-market sale of the grease, the value of the theft may be calculated on what a legitimate buyer, such as Buffalo Biodiesel, would have paid the restaurant for the grease that is stolen.

See also  Employers can require vaccinated and unvaccinated be separated

“That’s petit larceny,” noted George, whose job also involves convincing law enforcement that this is part of a bigger problem that could lead to more serious crimes, such as money laundering.

If Majumdar is paying 25 cents per gallon of raw cooking pill, then selling the refined product he makes from it for $4.50 per gallon, it wouldn’t seem to make much sense for an unscrupulous operator to buy it from thieves for $2.50 per gallon and then make a much smaller profit.

Unless there’s something else involved.

If an organized crime syndicate is involved, as George believes, then it could be that they don’t care as much about the smaller amount they may be making on the grease, as they might about the opportunity such a scheme might create for the money laundering of profits from much more lucrative enterprises, such as drug sales.

In the meantime, the thieves are costing the restaurant owners the money they would have made by selling the grease to Majumdar, for whom the stakes are even higher.

While widespread, the largest rash of grease thefts experienced by Buffalo Biodiesel have come in states such as New Jersey and Pennsylvania, where up to 80% of the grease it has contracts to buy has been siphoned off by thieves, who brazenly break the locks on the vats or in some cases just saw their way through the covers of grease traps.

“We have places now where it’s not even worth picking up,” he said.

However, the recent theft of grease from Pan’s Garden tells him the grease bandits, in their never-ending thirst, are widening their area of operation.

“It tells me this is all moving toward Western New York,” he said.

While the theft of grease may not sound serious, and in fact was once famously lampooned in an episode of the Simpsons, it’s no laughing matter to the victimized

If there is one thing that George believes local law enforcement should take seriously, is the threat of potential violence, which is something Majumdar is also concerned with, to the point that he’s hired a social media team to post stories about the thefts, and videos of them occurring, and to alert restaurants not only about the crimes, but also about the potential danger that exists in confronting the thieves.

“We’ve had incidences where they will confront these people and that’s what we’re concerned about,” George said. “This is going to ultimately escalate into violence against third parties, whether they are restaurant owners getting hurt or employees of Buffalo Biodiesel. Some of these people (when confronted) aren’t going to turn and run. There’s too much money involved.” 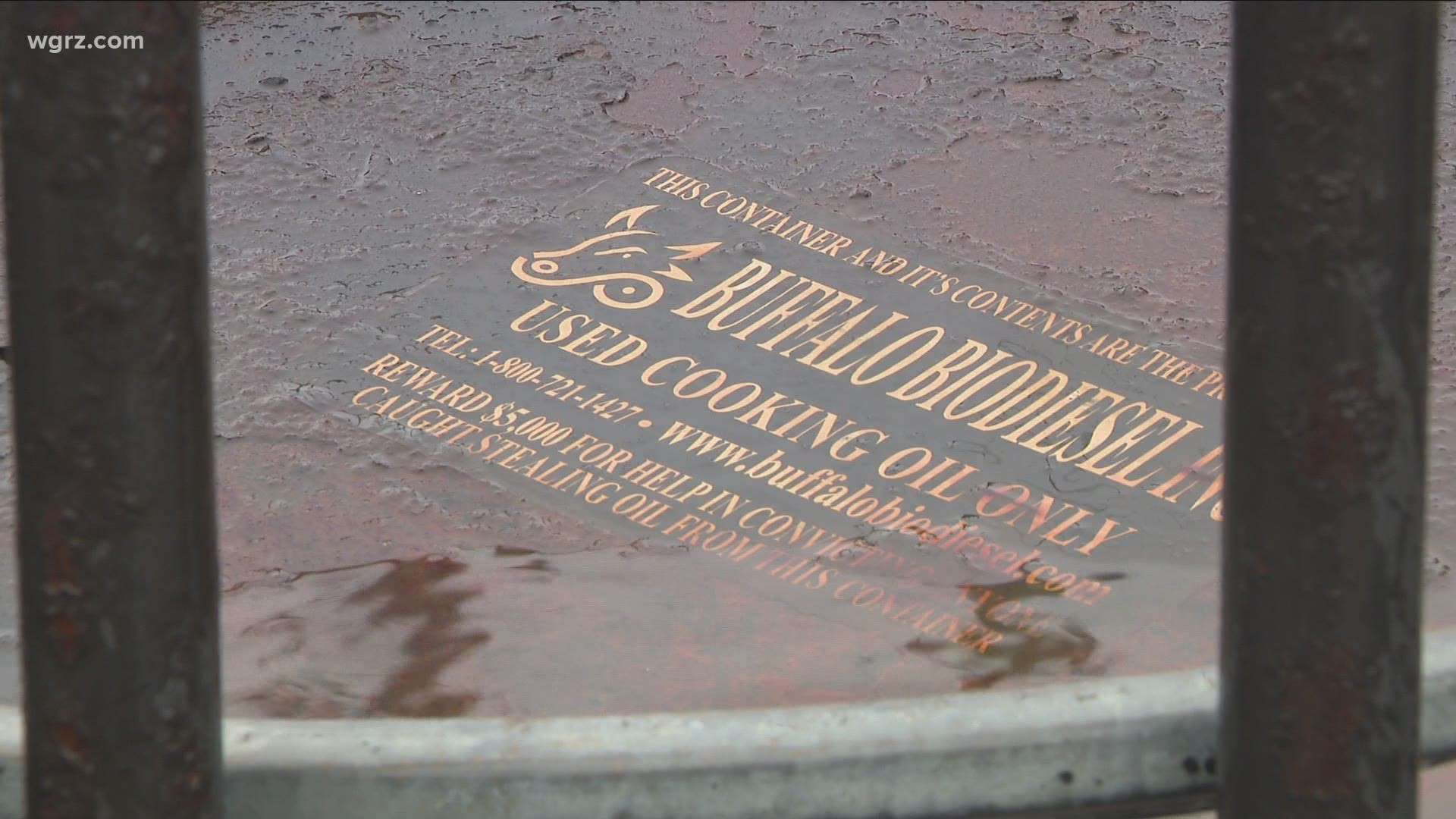