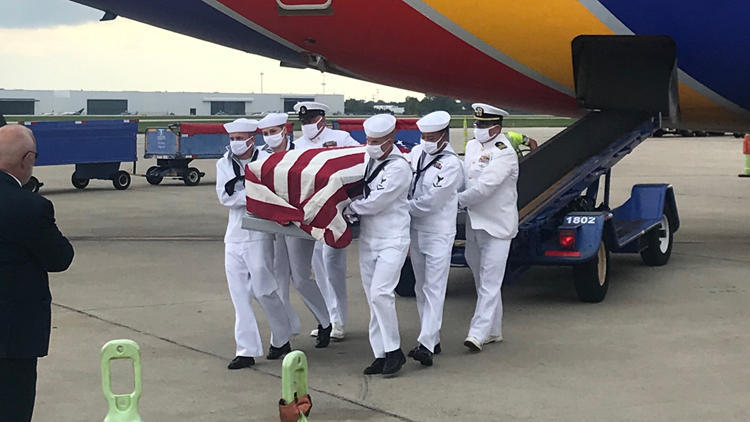 Russell Roach was on the USS Oklahoma when it, along with several other ships, was attacked in December 1941.

COLUMBUS, Ohio — The remains of a man who died during World War II returned to central Ohio on Monday.

Seaman 1st class Russell Roach died at Pearl Harbor while he was on the USS Oklahoma, which was one of the many ships attacked on Dec. 7, 1941.

Roach’s casket was carried off an airplane by six sailors at John Glenn Columbus International Airport and put it into a hearse.

Patty DeGrarmo, Roach’s niece, said she was tearing up seeing his casket come off the airplane after 80 years.

“I’m so happy to have him home. It’s just wonderful. And everybody has honored him. So wonderful,” DeGarmo said.

DeGarmo said the Navy contacted her in 2008 saying they believed they had Roach’s remains. The Navy came to her home, did a DNA test and it was a match. She said the Navy has been working with her through the entire process.

Roach will be laid to rest at the Greenwood Cemetery in Zanesville on Wednesday where DeGarmo said his mother, father and siblings are all buried.

“He’ll be with them and that makes me feel so good,” DeGarmo said.

Brian Flanders, a member of the group, said it is an honor to do this for the family.

“We give them [the veteran] honor at the time of burial. We do a final salute for the family. And we do these safety escorts for them as well. So we’re just there to help the family through their times of mourning and make sure that everything goes off without a hitch for the family,” Flanders said.

The funeral will be held at 11 a.m. on Wednesday.