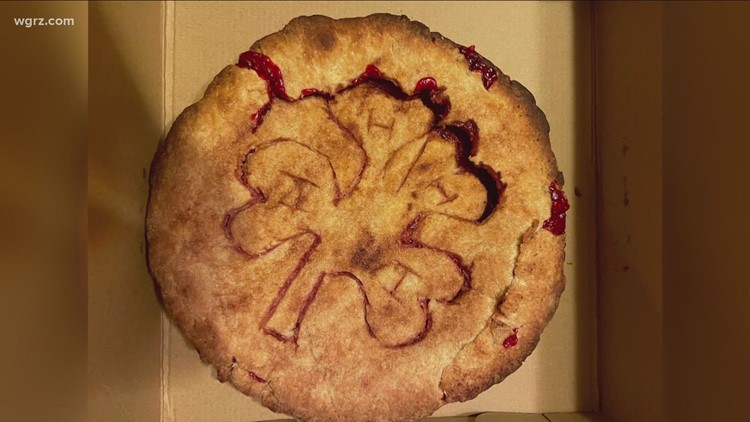 When 6-year-old Jane Haul baked a raspberry pie for her first ever 4-H auction, she didn’t expect a bidding war to break out over it. But it did.

PIKE, N.Y. — You probably can’t imagine spending hundreds of dollars on a homemade pie, let alone thousands, but that’s exactly what one man did at the Wyoming County Fair.

When 6-year-old Jane Haul baked a raspberry pie for her first ever 4-H auction, she didn’t expect a bidding war to break out over it. But that’s what unfolded at the fair on Wednesday night.

Bob Burt, who happens to be Jane’s grandfather’s cousin, was ultimately victorious over another important family connection, their hoof-trimmer.

We’ll let Bob tell you himself what the winning bid was.

Jane said “we were going to make a peach (pie), but somebody else was going to do it, because we have lots of peaches, and we also have raspberry bushes, so we made raspberry pie.”

Pam Haul, Jane’s mother, added: “It was very exciting. One of the auctioneers lifted Jane up so that everyone could see her and the poster that she had made advertising the pie, and everybody went wild when the hammer finally dropped and the auctioneer said ‘sold!’ “

Bob owns Burt’s Lumber and Building Supply. He brought the pie to work the next day and spilt it into 12 pieces for his employees, which comes out to about $333 per slice.