Home » How many medals did the USA win in the 2020 Tokyo Olympics? 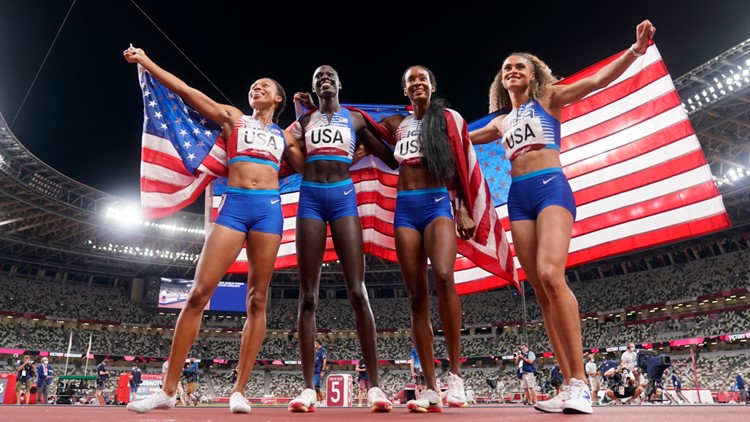 The United States racked up 113 total medals in the 2020 Tokyo Olympics, the most of any other nation. The U.S also won the most gold medals, 39, edging out China by one. Japan is third with 27.

The Tokyo Olympics closed Sunday. The closing ceremony will air in the U.S. in primetime Sunday at 8 p.m. ET.

RELATED: Was Allyson Felix able to make Olympic history in the 400 meters?

American gymnast Jade Carey, 21, won the gold medal on floor exercise. She bounced back from a frightening stumble during the vault final last Sunday to claim the top spot on the floor with a score of 14.366.

American record-holder Valarie Allman got to work early this past Monday in the women’s discus final. Her first attempt won her Olympic gold at 68.98 meters.

Last Sunday morning, Team USA had its best weightlifting result at the Olympics in over two decades. Kate Nye took silver for the United States’ best result in the sport since 2000.

The U.S. Swimming team has contributed the bulk of those medals, making up 30 of the 113. The first gold medal for the U.S. was won by Chase Kalisz, who shined in the men’s 400-meter individual medley. Fellow American Jay Litherland took silver in the race. Lydia Jacoby won gold in the women’s 100-meter backstroke, and Caeleb Dressel led the men’s 4×100-meter freestyle relay team to gold. Dressel has gone on to win three more gold medals, breaking his own world record in the 100-meter butterfly in the process.

Dressel broke an Olympic record in the 50-meter freestyle on Saturday night. The U.S. closed out swimming strong Saturday night, breaking a world record in the men’s 4×100-meter medley relay with the team of Ryan Murphy, Michael Andrew, Caeleb Dressel, and Zach Apple.

The only male swimmers with five gold medals at a single Olympics:

Among the gold medals are some historic firsts for the Americans.

On Tuesday, July 27, American surfer Carissa Moore and Italo Ferreira of Brazil became the first Olympic surfing champions in the sport’s Olympic debut. Moore, a 28-year-old from Hawaii, delivered a standout performance and took gold in the women’s competition, while Ferreira won in the men’s.

Swimming superstar Katie Ledecky swam for gold in the first-ever women’s 1,500-meter freestyle on Tuesday night. American teammate Erica Sullivan got the silver and the bronze went to Germany’s Sarah Kohler. Ledecky capped off her 2020 Olympics with a gold in the 800m freestyle—marking her third straight Olympics win in the event.

American Bobby Finke had an incredible come-from-behind win in the first-ever men’s 800-meter freestyle Wednesday night, going from fifth to first in the last 50 meters of the race to win gold. He had yet another amazing finish Saturday night when he won gold in the men’s 1500-meter freestyle.

This story will be updated as the Olympics continue.