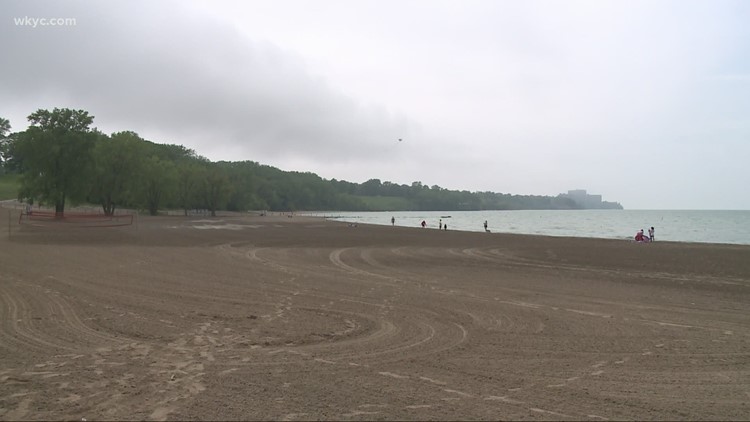 A spokesperson for the Northeast Ohio Sewer District said signs will be up through Monday, until water samples prove E. Coli levels are within acceptable limits.

CLEVELAND — Northeast Ohioans are being asked to stay out of the water at Edgewater beach after sewage overflow and rainwater contaminated the water to unsafe levels.

Typically, a warm Sunday at Edgewater Beach during the summer is full of people from all over Northeast Ohio.

Beachgoers came for the fun but were hit with a nasty reality: the water at the beach was unsafe to swim in due to sewage overflow.

“It’s disgusting,” Cheyenne Kraus said as she stood in the sand with her family.

The advisory came in just as Northeast Ohioans’ toes hit the sand.

We got here, and we were ready for water and we can’t have it,” Fishburn said.

“While the lifeguards were here, they were to advise us not to get into the water but after they left it’s at your own risk,” Lumpkin said.

Edgewater Beach is a common place for the overflow; NEORSD said in a press release, the overflow happened four times in 2020.

For many, the high E. Coli levels are enough to keep them out of the water.

“Sewage is no joke,” Jason Kraus said. “There should be a lot more signs though, honestly.”

Despite warning and caution signs being posted all over Edgewater Beach some people told 3News the warning and bacteria isn’t that big of a deal.

“Do you still not mind getting into this water?” 3News’ Marisa Saenz asked.

“No, not really,” Nathan Tresise said. “I grew up in this water so if nothing bad, happened yet I don’t think it’s going to happen.”

In an effort to prevent more overflows, the sewer district said it has sealed access covers to the beach, removed inflatable dams, and improved ventilation at the Edgewater Marina treatment plant.

A spokesperson for the sewer district said signs will be up through Monday, until water samples prove E. Coli levels are within acceptable limits.