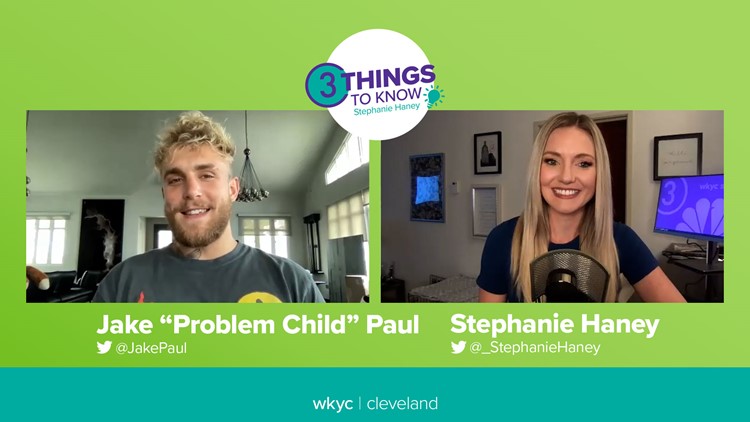 Speaking to 3News’ Stephanie Haney, Jake Paul discussed his upcoming fight against Tyron Woodley in his hometown of Cleveland.

CLEVELAND — Jake Paul is no stranger to being the bad guy — or as it’s known in the world of professional wrestling, the “heel.” It’s a role he relishes.

“There’s always been pressure on me in my entire career,” Paul said during a press conference last month. “Millions of people want to see Jake Paul lose because I’m that polarizing, villainizing figure.”

But when it comes to this Sunday’s boxing match against former UFC welterweight champion Tyron Woodley, the 24-year-old Paul will found himself in a more unfamiliar position: hometown hero.

A native of nearby Westlake, Paul grew up less than 20 miles away from the location of Sunday night’s fight, Cleveland’s Rocket Mortgage FieldHouse. And while a unanimous ovation isn’t likely — even in his own hometown — the significance of Sunday’s fight isn’t lost on the social media superstar.


“This is honestly a dream come true. Like, it’s still surreal. I don’t even know if it’s really hit me yet,” Paul told 3News’ Stephanie Haney on the 3 Things to Know podcast. “I think once I walk into the stadium, I’ll sort of realize how crazy this is. But to be able to perform in front of my hometown, my friends and family, I’m just like, so happy and proud of what I’ve been able to do.

“This is sort of the crescendo of my whole entire career and I get to share that with the people closest to me, in the city that I grew up. I think this could be one of the best nights or moments of my life, ever, so I’m just so ready, I’m ready and excited.”

The location isn’t the only factor that will be significant for Paul on Sunday.


Whereas the former Disney Channel star was a sizable favorite entering his previous fights against former NBA guard Nate Robinson and former MMA star Ben Askren — both of which he won — he opened Sunday’s fight vs. Woodley as a slighter favorite at -138 odds. While his odds have since grown to a more sizable -190, Paul acknowledged to Haney that Woodley is the toughest opponent he will have fought in his boxing career.

“He’s a 5-time UFC champion. He has knockout power,” Paul said of Woodley. “He’s been boxing for longer than I have. He was winning championships with his fists while I was on Disney Channel doing the Mickey Mouse ears thing.

“He’s a tough guy and I know that. That’s why [on] August 29 I have to be super sharp, I have to be more prepared than ever and we’ve done every single thing in camp right leading up to this moment and I’m prepared and I just have to go in there. The only person in that ring that can beat me is myself.”

As for what’s next for Paul after Woodley, he isn’t ruling anything out — including a potential fight against his brother, Logan Paul. But at this point, he remains focused on his future in boxing and potentially adding a title of his own to his resume.

“The goal is to become the biggest prize fighter in the world and make history,” he said. “Bring more kids, the youth, into the sport of boxing because it’s changed my life and I think it can change everyone else’s life and maybe, who knows, I’ll become the world champion along the way, just for fun.”