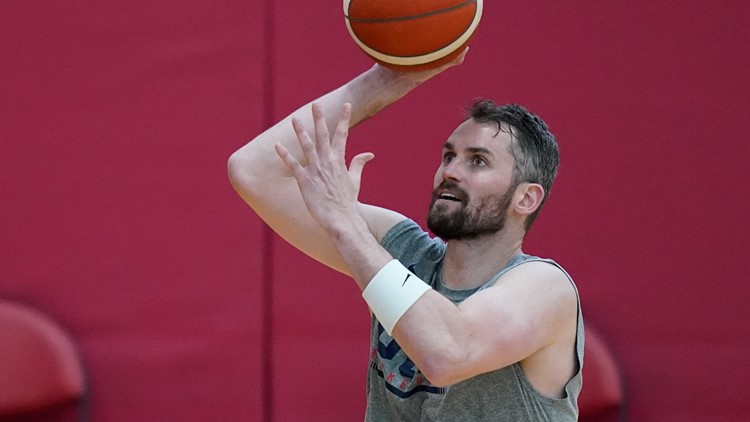 TOKYO, Japan — Editor’s note: the video in the player above is from a previous story.

But with the U.S. men’s national team now laying claim to a 1-1 record in Olympics play and Love having withdrawn due to a nagging calf injury before the team even arrived in Tokyo, Colangelo is singing a different tune.

Speaking to reporters in Tokyo on Friday, Colangelo discussed what has largely been viewed as a disappointing stint for Team USA to this point in the Olympics. And in doing so, the four-time NBA Executive of the Year pointed to Love including on its roster as one of the biggest mistakes his team made in its selection process.

“I didn’t think Kevin Love was gonna play. I wasn’t even sure he had much left to play,” Colangelo said, according to Joe Vardon of The Athletic. “He reached out to us and said he was in shape and said he felt he owed us. And on the basis of that, we’re looking at someone with international experience who at one time was a heck of a rebounder and could still shoot the ball. You know, being like a 12th man on a roster. Well, it didn’t work out. He wasn’t in shape. And he was way behind as it turned out. So you move on.”

Even before he withdrew from Team USA on July 16, Love’s selection to Team USA was a polarizing one. Despite being a five-time All-Star, the 32-year-old Love has appeared in just 103 games over the course of the past three seasons due to various injuries.

This past season, Love played in just 25 of Cleveland’s 72 games, averaging 12.2 points and 7.4 rebounds — his worst statistical output since his rookie season. Speaking to reporters following his Team USA selection earlier this summer, the UCLA product expressed optimism that the Olympics would signal a new phase in his career, although that ultimately proved not to be the case.

“I understand going into my 14th season that probably being that No. 1 guy, playing 35 minutes, getting 20 touches a game, is probably in my rearview,” Love said. “But in how I can affect a team at my level now and feeling how I’m feeling now, I know that I can do it at a very high level. So I don’t try to put a ceiling or limit on myself at all. So long as I’m feeling good, I know I’m going to play good.”