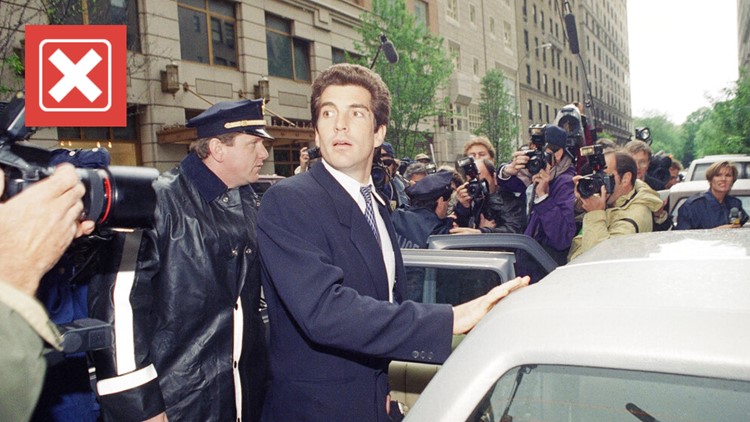 Conspiracy theories that John F. Kennedy Jr. and his wife are alive have been circulating, even though it’s been 22 years since the plane crash.

An old claim that John F. Kennedy Jr. faked his death in a 1999 plane crash has been revived. This time, online conspiracy theorists think he will be announcing a “big reveal” with former President Donald Trump.

President Joe Biden won the 2020 presidential election, though some online users are still claiming, without evidence, that Trump actually won the election.

The Kennedy claims most recently received renewed traction when the comedic group The Good Liars interviewed a Trump supporter and posted the video to Twitter. The woman in the video is wearing a “Trump Kennedy 2021” shirt and said she believes Kennedy is still alive and will be Trump’s vice president in 2021.

The video from The Good Liars has been viewed more than 400,000 times.

We talked to a woman who believes that later this year Donald Trump will be President with JFK Jr (1960-1999) as his Vice President. pic.twitter.com/jcs9Entzmz

No, there is no evidence John F. Kennedy Jr. is still alive and former President Donald Trump will not be president in 2021. The National Transportation Safety Board on July 20, 1999, confirmed all aboard the plane were killed in the crash.

John F. Kennedy Jr. was a lawyer, journalist and magazine publisher, and the son of former president John F. Kennedy and first lady Jaqueline Kennedy Onassis. John F. Kennedy Jr., his wife Carolyn Bessette Kennedy, and her sister Lauren Bessette, were confirmed dead by the National Transportation Safety Board after a plane crash on Martha’s Vineyard on July 16, 1999. The crash was highly publicized, but since his death, online users have speculated he and his wife are still alive.

Travis View, host of the QAnon Anonymous podcast, where the hosts explore and discuss conspiracy theories and the QAnon culture, told VERIFY the “JFK lives” myth started in April 2018 with a “Q drop” – or theory published anonymously online by an individual known only as “Q”.

The posts from “Q” launched a movement known as “QAnon,” a conspiracy network that began in 2017 after former President Donald Trump was elected, and many posters believe there was and is a concerted effort by the deep state to remove Trump from office.

View said the “Q drop” “referenced the conspiracy theory that Hillary Clinton was responsible for JFK Jr’s death in 1999.”

“The absurd and baseless story claims that Clinton killed JFK Jr. in that fateful plane crash because he was going to run for the U.S. Senate seat that she wanted. This led some QAnon followers to speculate that JFK Jr. wasn’t dead after all,” View said.

Once the claim was out there, another anonymous poster claimed to be Kennedy himself and in June 2018 implied he had faked his death, View told VERIFY, adding that Q denied the legitimacy of the claim and stated Kennedy was not alive, but “that didn’t prevent some QAnon followers from believing that JFK Jr. is alive anyway.”

Even though the Kennedy lives theory originated in the same forums where mainline QAnon believers followed and posted, View said the “JFK lives” group is “a minority sect of QAnon and not a mainline QAnon belief. The majority of QAnon followers don’t believe that JFK Jr is alive.”

“I suspect that the obsession with JFK Jr. stems from the belief that JFK [former President John Fitzgerald Kennedy] was assassinated by the ‘deep state.’ Some QAnon followers are attracted to the idea that JFK Jr. is avenging his father’s death,” View said.

Q hasn’t posted since December 2020, View said, and most followers were removed from mainstream networks and are using alternate platforms, like messaging apps and pseudo-anonymous social networking sites.

An Update to How We Address Movements and Organizations Tied to Violence https://t.co/YJb4E46BJf

On one pseudo-anonymous social site, VERIFY found a profile under the name of John F. Kennedy Jr. that was created on July 1, 2021. As of July 8, the profile had more than 4,000 followers.

The profile states: “Trump/Kennedy 2021 Stay Tuned for the big reveal #WWG1WGA.” The hashtag, and known tagline for QAnon followers, is an acronym for “where we go one, we go all.”

The profile photo is of a man named Vincent Fusca, a real person who some claim is actually Kennedy Jr. in disguise. On YouTube, one video from October 2018 with more than 59,000 views, claims Fusca’s wife is actually Carolyn B. Kennedy, who also died on the plane.

A Twitter profile under Fusca’s name is still active with more than 133,000 followers, and the latest tweet posted on January 7. QAnon content with the Kennedy Jr. conspiracy referenced dates back to June 2019 on the profile.

The Good Liars posted a video on July 7 showing them confronting Fusca with the caption: “A lot of Trump supporters think this is JFK Jr – who was 6’1, handsome and currently dead.” The video has more than 23,000 likes and over 900 comments.

More from VERIFY: No, there isn’t going to be a ‘second inauguration’ for Donald Trump this summer and you can’t buy tickets

VERIFY
Our journalists work to separate fact from fiction so that you can understand what is true and false online. Please consider subscribing to our daily newsletter, text alerts and our YouTube channel. You can also follow us on Snapchat, Twitter, Instagram or Facebook.

Enter to win a seat on a Virgin Galactic flight to space
Gas prices in Ohio cheaper than the U.S. average
Comment