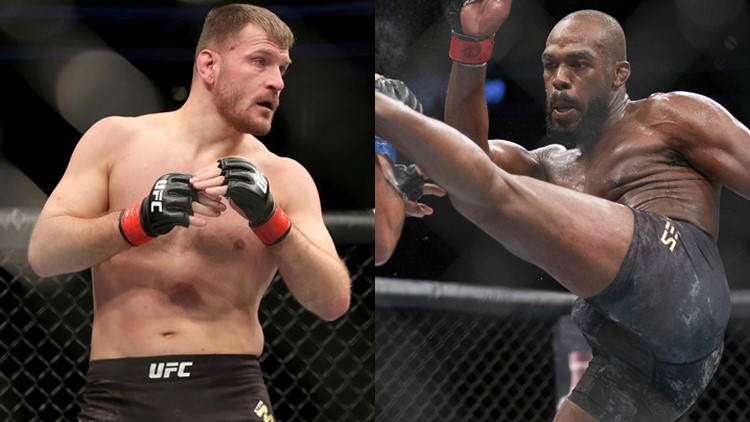 Heading into UFC 260 last month, it appeared that the winner of the UFC Heavyweight Championship fight between Stipe Miocic and Francis Ngannou would be in line for a super fight with Jon “Bones” Jones.

But despite losing his UFC title to Ngannou via second-round knockout, it appears that Miocic may wind up fighting Jones anyways.

With negotiations with Jones at a standstill, UFC president Dana White has repeatedly proclaimed that Derrick Lewis will be receiving the first title shot at Ngannou’s new championship. As for what’s next for Miocic, that remains unclear. But speaking to ESPN’s Brett Okamoto on Tuesday, White hinted that a fight between Miocic and Jones could be in the cards.

“I don’t know, we’ll see what’s next. I like that he’s fired up and wants to fight again,” White said of Miocic. “But yeah, listen — we could do Jon and Stipe too.”

Dana White tells @bokamotoESPN that Derrick Lewis will be next for Francis Ngannou and UFC could also match “Jon [Jones] and Stipe [Miocic] too.” pic.twitter.com/D1cvdeIkzi

While such a fight has yet to be negotiated, the idea of Miocic and Jones squaring off is certainly an intriguing one. A two-time heavyweight champion, Miocic lays claim to the record for most heavyweight title defenses in UFC history and is considered by many — including White — to be the greatest heavyweight in MMA history.

As for Jones, many consider the former light heavyweight champion to be one of the most talented fighters in MMA history, although legal problems and issues with substance abuse have, at times, derailed his career. After retaining the UFC Light Heavyweight Championship against Dominick Reyes at UFC 247 in February 2020, Jones vacated the title in order to move up to the heavyweight division but has yet to be scheduled for a fight amid his ongoing negotiations.

“Listen, Jon’s one of the best to ever do it,” White said. “If he wants to fight, we’ll get a fight done for him. He’s gotta want to do it.”