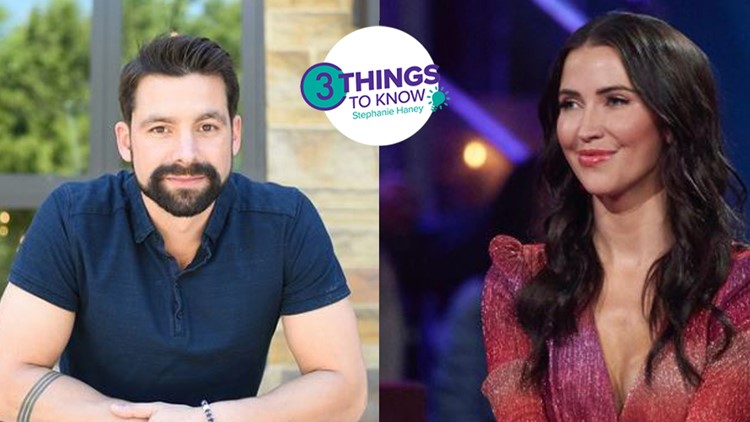 Michael explains why Kaitlyn asking if The Bachelorette Katie Thurston would give him a second chance was an impossible question, on the 3 Things to Know podcast

AKRON, Ohio — The Bachelorette’s Michael Allio is calling out franchise co-host Kaitlyn Bristowe for ‘throwing him under the bus’ on last week’s ‘Men Tell All’ special, following his self-elimination from the reality dating show.

Michael 37, explained on the 3 Things to Know with Stephanie Haney podcast how there was no good answer that he or The Bachelorette Katie Thurston could have given about whether they would give their love a second chance, after he chose to leave the show to be with his 4-year-old son, James.

‘The second [the question] left Kaitlyn‘s mouth, I’m just like, “Oh, here it comes, old dude getting rejected,” which is all good. I guess I deserve that anyways for leaving,’ Michael tells Stephanie in a candid conversation about how his life has changed after leaving the show.

RELATED: The Bachelorette Kate Thurston turns down Akron Michael Allio for a second chance, after he sends himself home to be with his son James

The moment Michael really got put on the hot seat during the ‘Men Tell All’ special of The Bachelorette was when Kaitlyn asked him, point blank, if he’d like a second chance with Katie, if she would have him.

‘When I’m up on stage with [co-hosts] Tayshia [Adams] and Kaitlyn, you know they ask me if I still have feelings for her and I’m not gonna lie,’ Michael tells Stephanie. ‘It would’ve been easy for me to say, “You know watching this back all those feelings are gone, I’m happy for her,” and give some polished answer but I really can’t detach myself that quickly. So when I said that I still have feelings for her, that’s very much real.’

‘Now… Kaitlyn kind of threw me under the bus here, because I believe Katie is totally happy. As long as she’s happy, I’m cool. But even if Katie did want to leave with me, she couldn’t say that on TV there’s still two more episodes [left in her season of The Bachelorette] so it was a lose-lose [situation.’

Listen to The Bachelorette’s Michael Allio on the 3 Things to Know podcast on Spotify, or  scroll down for the video podcast plus links to listen on your favorite podcast platform


While acknowledging that Katie was limited in what she could say, Michael did take issue with her response when Kaitlyn asked her if she’d be open to giving Michael a second chance, and reiterated with a tough spot the co-host of the special put both of them in by asking if it would be possible to rekindle their romance.

‘But I think they caught her off guard too. And she’s in a tough situation. I mean, she could possibly be engaged. She can’t necessarily go deep into emotions, either prior or present, that she still feels for me, you know? It’s just a lose-lose question Kaitlyn. Kaitlyn Bristow, thank you.’

Listen to the full chat with Michael, including what it would take for him to agree to the next ‘Bachelor,’ and where Katie and him were planning on living if they had gotten engaged, on the 3 Things to Know with Stephanie Haney podcast on your favorite podcast platform, at these links:

If you enjoy the show, remember to subscribe on your favorite podcast platform, leave a rating and review, and share it with your friends to help us connect with more people in Northeast Ohio.’

Check out more episodes of the 3 Things to Know with Stephanie Haney podcast at the links below.

RELATED: The Bachelorette’s Michael Allio reveals he told Katie Thurston he won’t move out of Ohio

RELATED: The Bachelorette alum Blake Horstmann warns why it’s ‘dangerous’ to be ‘The Bachelor’ and thinks Michael Allio will be cast in that role